The following post was written by Matt Osman (and edited minimally for clarification).

After a pleasant, albeit unintended delay in Ilulissat, we were finally able to make it to our first field site!

Following two days of snow and clouds, it happened all at once; on the evening of April 28th there appeared a patch of blue sky on the horizon near Disko Island.  Soon after, we were approached by our two (very dedicated) Twin Otter pilots with exciting news of this being the start of a possible 6-8 hour window of clear weather to get up on to ice cap.  The pilots quickly made some calls and scheduled the airport to open at 5 AM the following morning (try making that happen at an American airport!), and following some anxious packing, a few precious hours of sleep, and a short plane commute, voila! – we were standing on the ice cap. True to the pilots’ predictions, the site’s surrounding scenery was short-lived; no more than hour after landing we were socked in with clouds and snow. 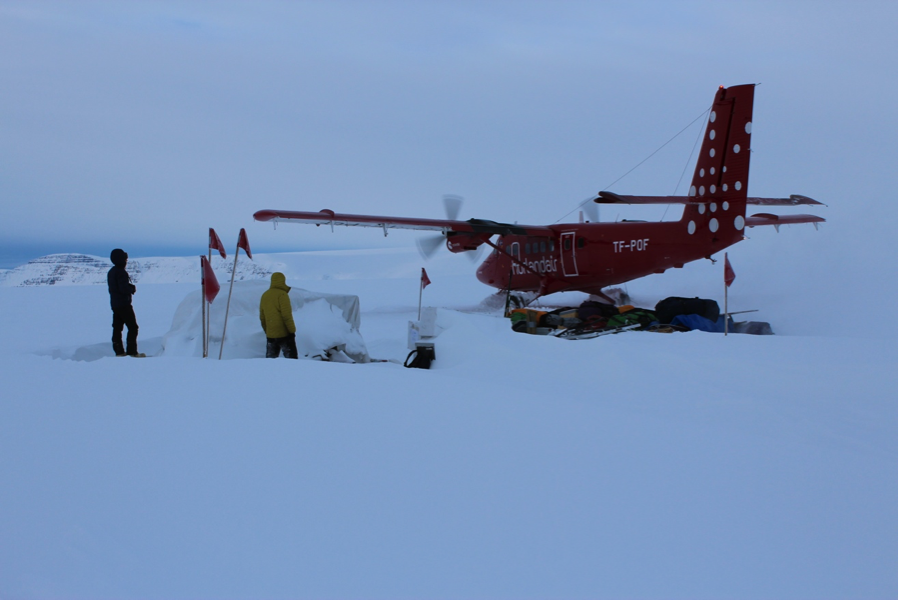 The Twin Otter plane taking off after dropping us off at the Disko Island Ice Cap. Can you spot the horizon to the right of the image?  Its absence underscores why clear weather is needed for safe air travel in Greenland.  (Photo credit: Matt Osman)

By midday our camp was set up; the cook shack and the drill tent sat center stage, surrounded by our little village of personal tents and a storage/restroom tent (check out image below). 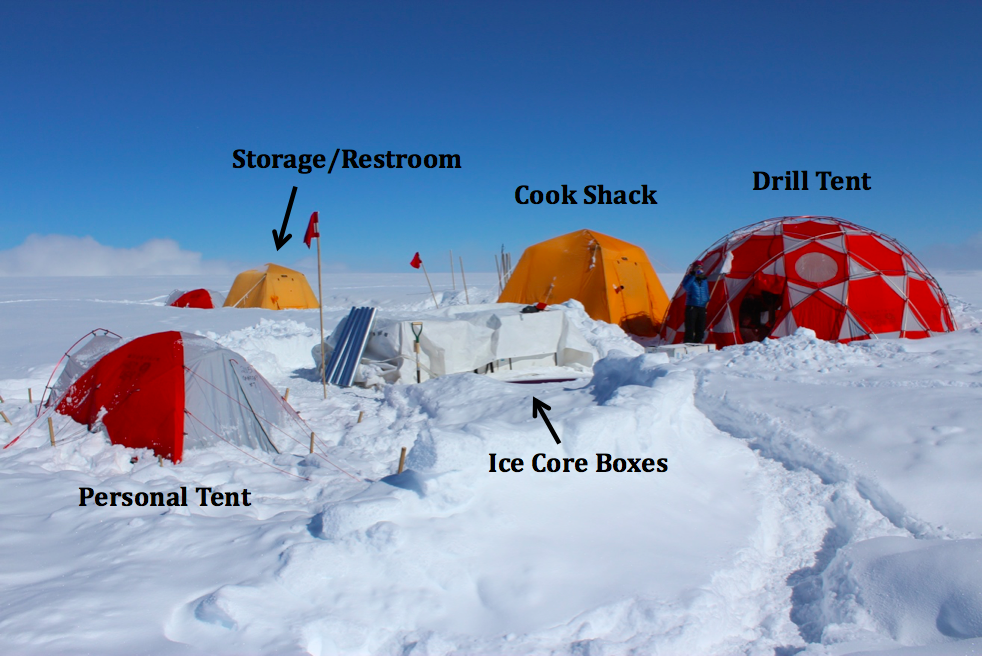 By afternoon, Mike, our driller, had the drill set up and we were ready to get coring.  From analyses on our 2014 short ice cores and ground penetrating radar profiles, it was clearly evident (and expected) that Disko Island Ice Cap was the meltiest of all the drill sites we will visit this year.  This year’s core was no exception; within two meters we were in solid ice.  In total, we ended up drilling about 40m of core total at Disko Island (a bit less than our goal due to some unexpected circumstances!), which will give us valuable new records on the last few decades of oceanographic and climatic variability in the region. Furthermore, we are now true experts at managing our “Ice Core Extraction and Processing Line” system.

Here’s a quick tutorial of how it works: 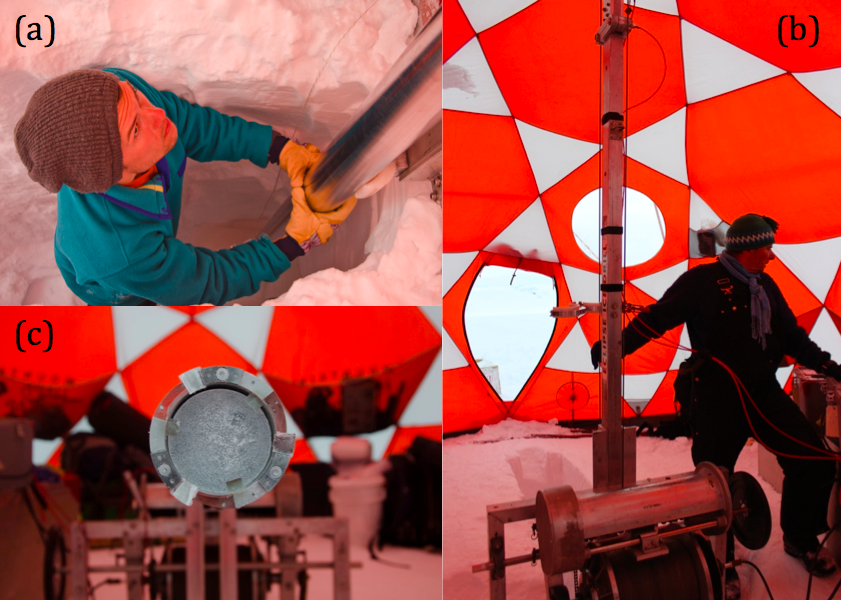 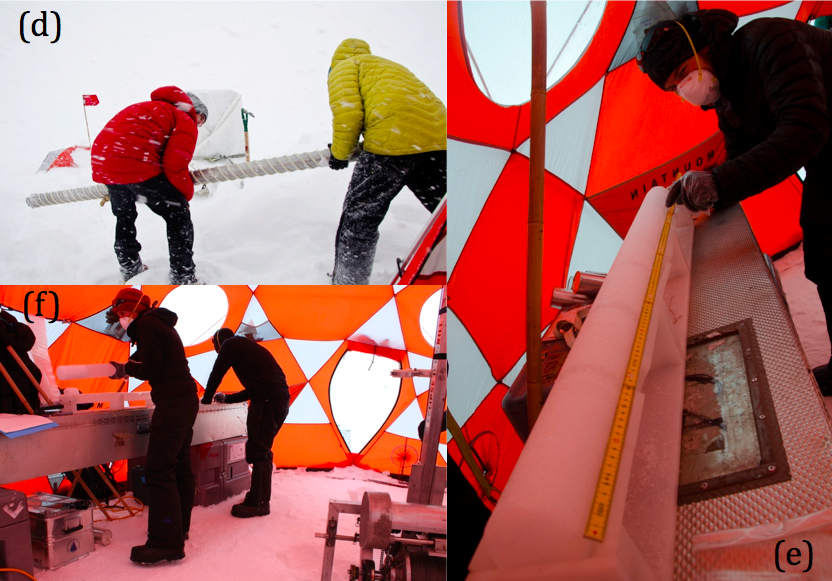 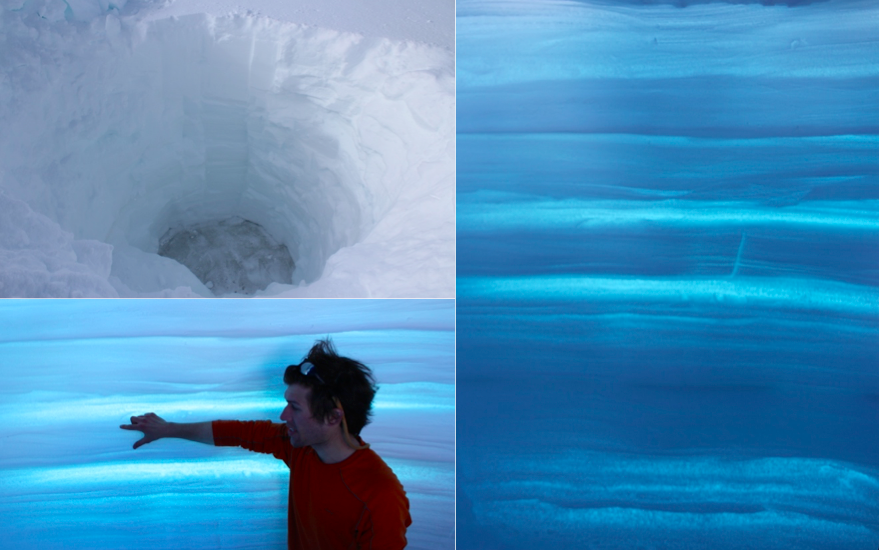 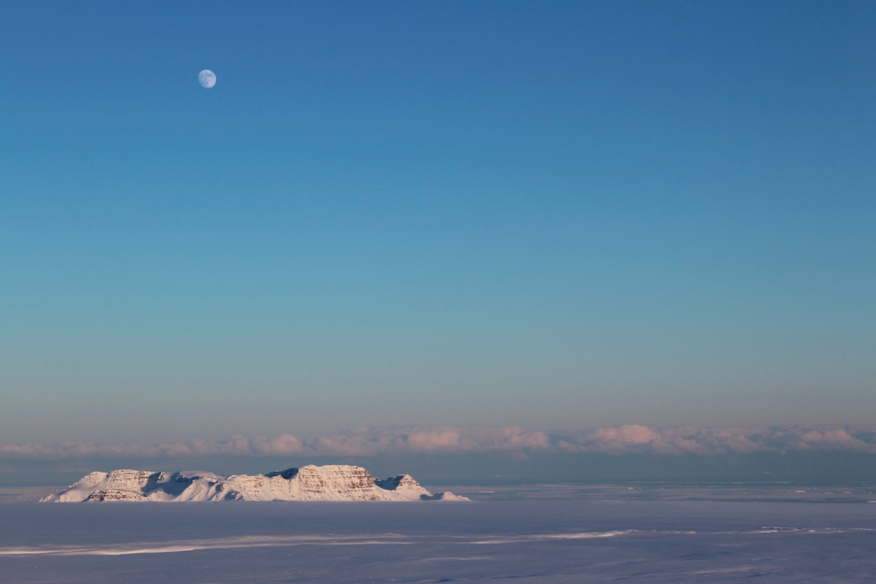 Waiting: A Sucker for Sucker Holes

Hurry up and wait has become the mantra to which we’ve obeyed since arriving in Greenland.  Since arriving in Qaarsut, it seems that we have spent a good portion of the last week frantically gearing up to go to the Nuussuaq field site, only to get caught holding on standby due to weather.  As I’ve come to realize, there exists a simple yet definitive hierarchy to which science adheres in Greenland. We scientists are at the whim of the helicopter/plane pilots, who control transportation in Greenland (the other, less viable travel option includes a mixture of boats and dog sleds).  The pilots, on the other hand, are at the whim of the weather; a simple cloudy day can create whiteout conditions on an ice cap, making landing impossible And what controls the weather? Seemingly, the God of Randomness; weather has proven completely unpredictable these past couple weeks, and we are often left waiting, in hopes of blue skies.  Sometimes, a spot of blue will appear – these are termed “sucker holes”, as I’m informed by Sarah (Das) and our helicopter pilot, Inge, and you don’t want to get caught a sucker for thinking they’ll last. The realistic caveat, though, is you also don’t want to get caught unprepared to go in case they do.  And so, we are left hurrying up and waiting for “optimal” flying conditions. 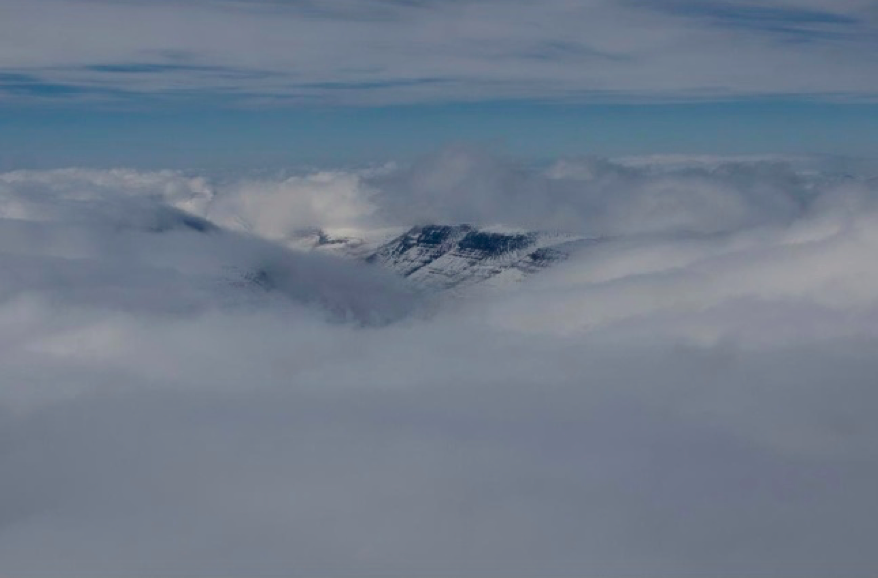 A classic sucker hole, as viewed from above.  Here was our view from the Sikorsky helicopter on the first attempt to land on the Disko Island Ice Cap. (Photo credit: Dr. Sarah Das, @sarahbdas on Twitter)

Yet, some time off is not necessarily a bad thing, and has allotted us time to explore the villages of Kangerlussuaq, Ilulisatt, and Qaarsut, and observe some of the daily habits of their inhabitants. A consistent aspect of Greenlandic villages I find particularly aesthetic are the assortment of house colors.  In a landscape that is snowy and essentially acts as a bleached canvas the majority of the year, the colorful towns seem to me to be as much an artistic expression of the inhabitants as they are a refuge.  I have to wonder though if the house colors are coordinated among neighbors; rarely will you find two next to each other the same color.  Pink with baby blue accents is probably the most vibrant color I’ve seen; personally, I would opt for a purple house. 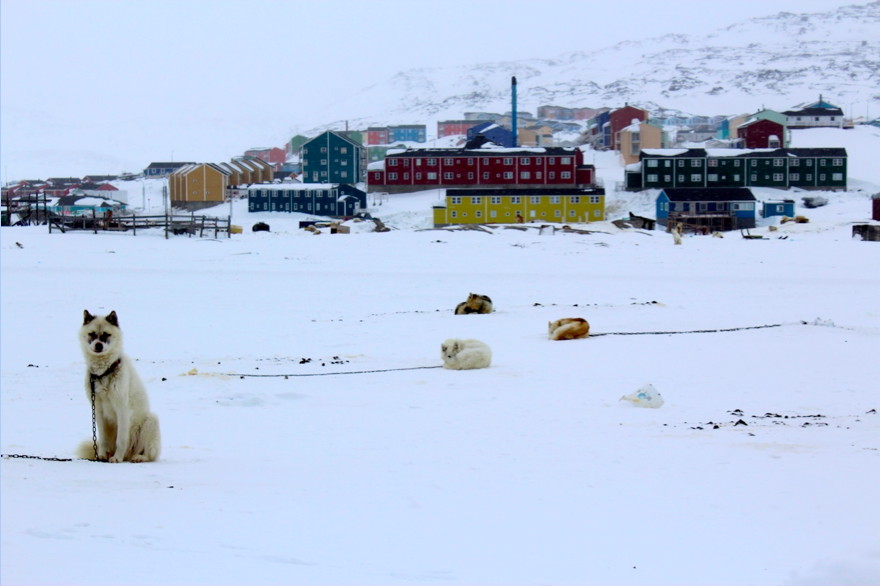 Greenlandic sled dogs are another commonplace sight (and sound!) in Greenland villages.  They are an ancient breed, descended from the dogs brought by the first Inuit hunters to Greenland, and are considered work dogs used for travel, not pets. On Sunday last week we had a fun opportunity to join the Qaarsut locals in a village dog-sled race for small children and grandmothers on the sea ice adjacent to town.  It was a blast, and everyone was in great spirits.  After completing the race, the participants were victoriously hoisted up in celebration, as seen in the photo below. 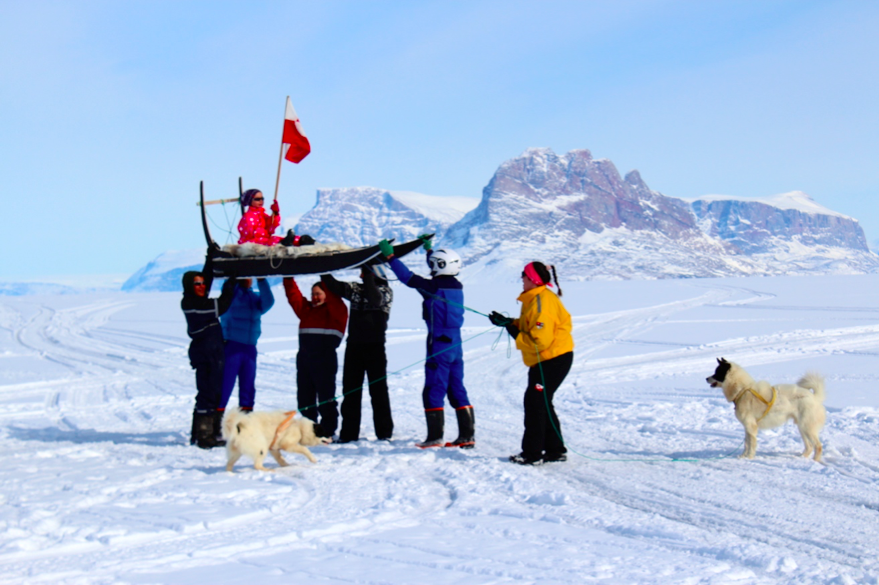 The main livelihood, and the number one export in Greenland, is fishing.  Below, Luke and our helicopter pilot contemplate a rack of dried cod in Qaarsut.  Yum. 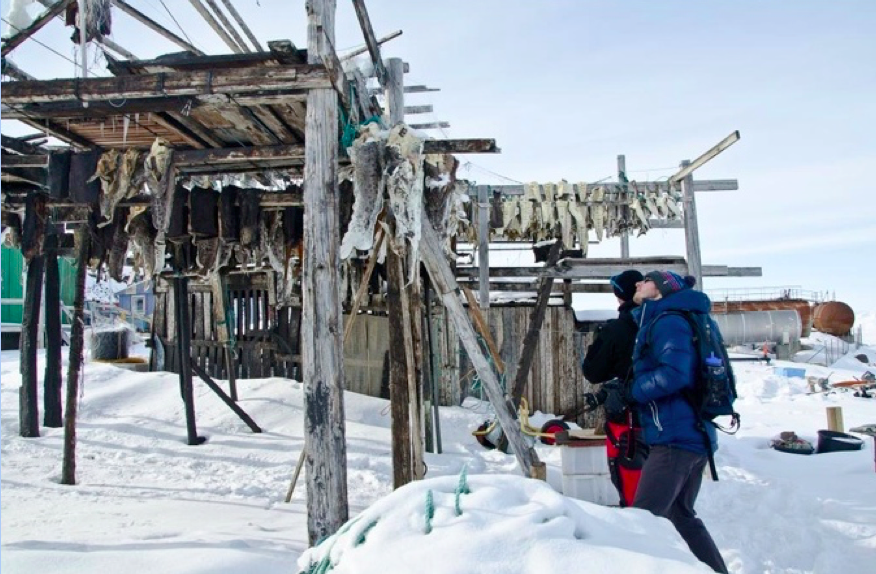 The Nuussuaq drill site was an overwhelming success, but it wasn’t without its difficulties and a fair bit of stress leading up to the fact.  Unlike the Disko Island Ice Cap and the Greenland Ice Sheet drill sites, the plan at Nuussuaq was to get chartered up via helicopter for daily trips ( approximately 10 minutes flight time), and to return to Qaarsut in the evenings. After nearly a week of waiting, on Thursday, May 8th the weather finally cleared and we were able to make it up to the Nuussuaqq ice cap and get everything set up.  The entire ice cap sits perched on a plateau dramatically rising from sea level to 2100m ( about 6800 feet) up from sea level, and it’s one of the more incredible landscapes I’ve ever been to; a view from the summit grants you a stunning 360˚-view with the Greenland Ice Sheet on the eastern skyline, Disko Bay and Island to the south, sea-ice covered Uummannaq Bay to the west, and a never-ending supply majestic carved peaks everywhere in between. Check last year’s posts for more photos. 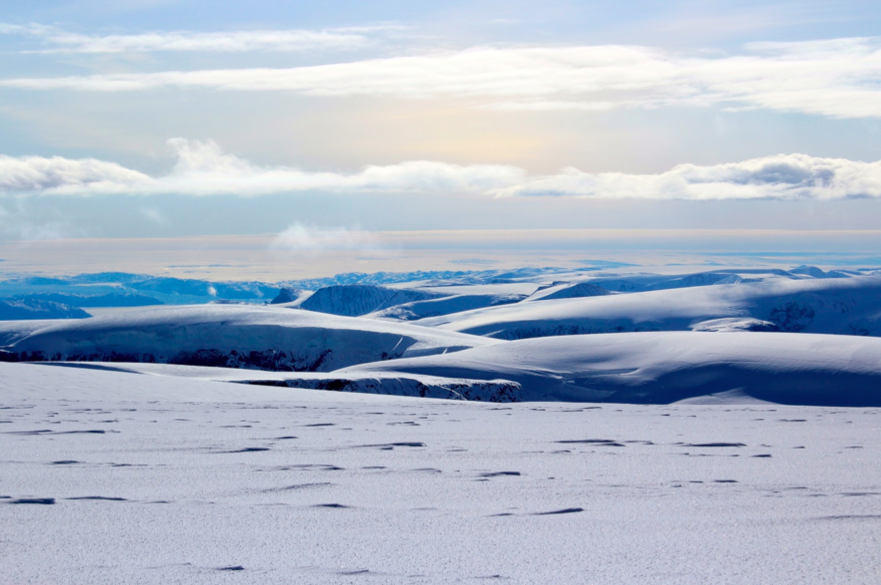 A view to the east from the Nuussuaq drill site.  The glowing white line on the horizon is the Greenland Ice Sheet. (Photo credit: M. Osman)

Thursday’s success in getting everything set up and ready to go to drill was met the following day with poor weather, forecasted to get worse the following three days.  At this point, our team had to make a decision – the daily commute plan was no longer an option as we had only a few days left to drill at Nuussuaq, and the incoming storm system would render the site a total failure.  We had to get in at all costs and stay. At noon on Friday, a sucker hole appeared in the sky, offering one final chance at getting in.  Without time to pack all our tents and camping kits, we hastily threw together our survival kits and sleeping bags and took off.  Understanding the weight of the situation, Inge, our skilled Norwegian pilot, was as determined as us to get us on the ice.  After circling above our socked in drill site, an opening in the clouds occurred fortuitously over a nearby red flag placed in the snow the previous day, and Inge rushed in to let us jump out.  WE HAD MADE IT!

Though the following three days did indeed consist largely of snow storms and whiteout, we were able to work the entire time.  With no other tents/amenities, our lives centered around drilling; we ate, slept, and worked around the clock in the drill tent (photo below). We had originally guesstimated the depth of the entire Nuussuaq ice cap to be 140m; at the end of the third day, we had retrieved an outstanding 138.4 meters of ice core (our original drill plan allotted 5-6 work days for 100m).  Needless to say, we were exhausted. Since annual ice layers become increasingly compressed the deeper and closer to the bed you dig, our ice core may contain a history of climate substantially longer than the originally intended 300-400 year record.  I am quite excited to get back to the lab and begin analyzing the data!

One more site to go: next up, the Greenland Ice Sheet. Stay tuned! 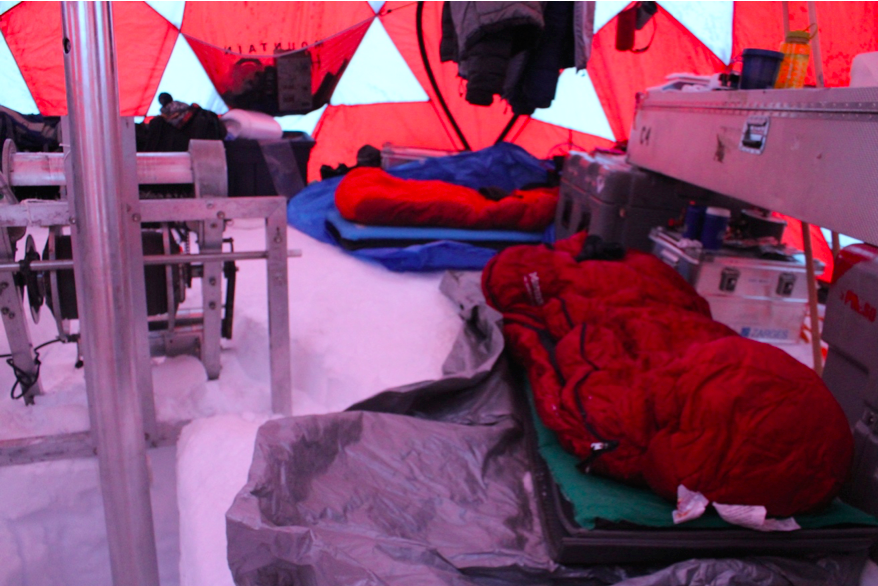 Our sleeping bags lined up in close quarters next to the drill.  (Photo credit: Matt Osman) 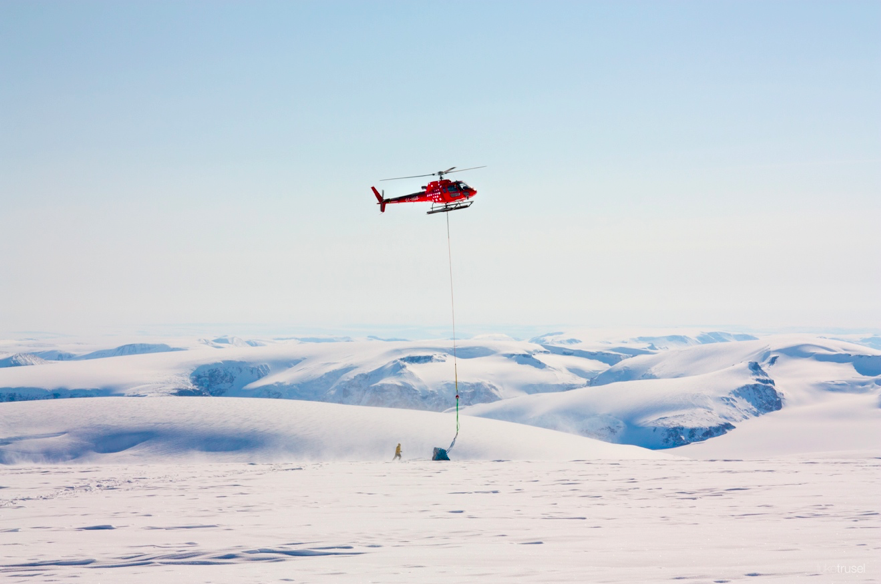 Mike Waszkiewicz hooking up our ice core boxes to the helicopter on our last day at Nuussuaq. They’ll be flown back down to Qaarsut and stored at -20˚C, until being transported on a cold deck flight back to the USA. (Photo credit: Luke Trusel) 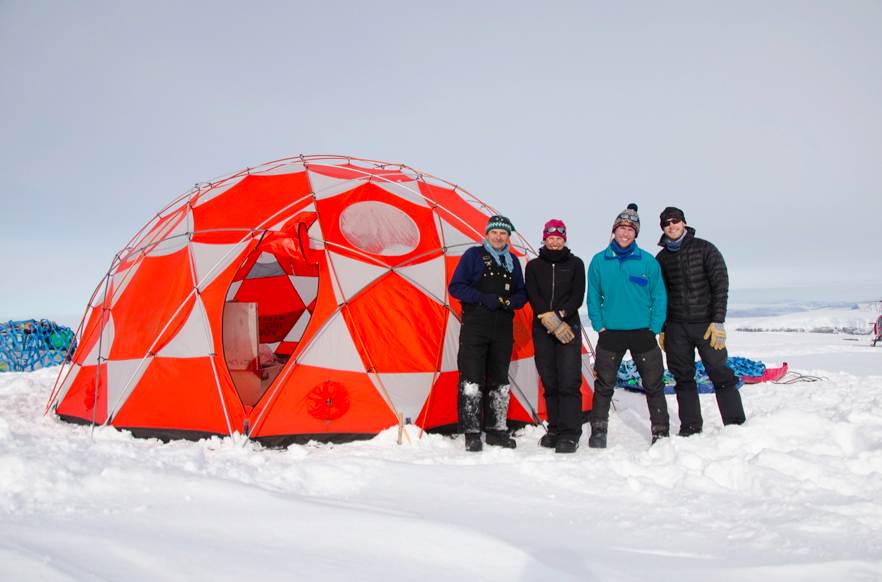 The team, relieved to be done after a tiring (but successful) three days at Nuussuaq. Left to right: Mike Waszkiewicz, Sarah Das, Matt Osman, and Luke Trusel