If you’ve been following Matt’s blog, you’ll know that we worked hard in the field this April collecting firn cores and snow pit samples and completing radar surveys at five different sites across west Greenland. But the work doesn’t stop there. Our cores were shipped from Greenland on a ‘cold deck’ flight to the National Ice Core Laboratory (NICL) in Lakewood, Colorado outside of Denver. From June 30 to July 3, PI Sarah Das, her new PhD student Matt Osman (yes, we have yet another Matt joining the team, so we will refer to him as “Oz”), Luke Trusel (currently a PhD student at Clark University working with PI Karen Frey, but starting a postdoc at WHOI with Sarah in the fall), and I (a PhD student at Clark University working with PI Karen Frey) traveled to NICL to begin processing the ice cores we collected this spring.

The National Ice Core Lab is maintained by the National Science Foundation, the U.S. Geological Survey, and the University of New Hampshire.  The physical facility includes an archive freezer held at a temperature of -36°C where some of the oldest cores from all over the world are stored. There is also a cold laboratory held at a temperature of -25°C which is where we spent most of our time processing our cores. We couldn’t have done any of the processing without the help of NICL employees Geoff Hargreaves and Richard Nunn. For lots of great information about NICL and the frozen facilities visit icecores.org. 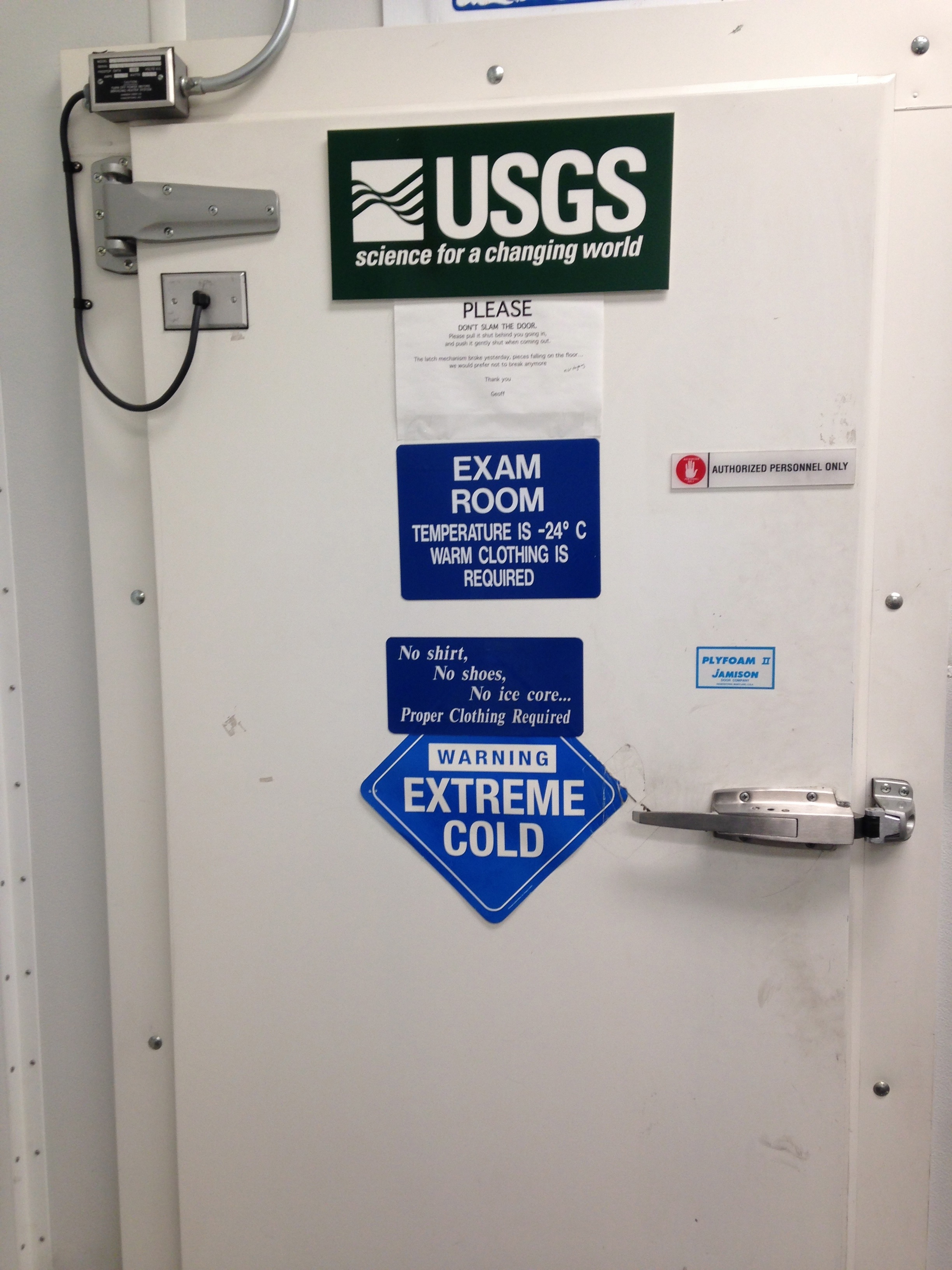 The door to the frozen lab at NICL. (Photo Credit: Sarah Das). 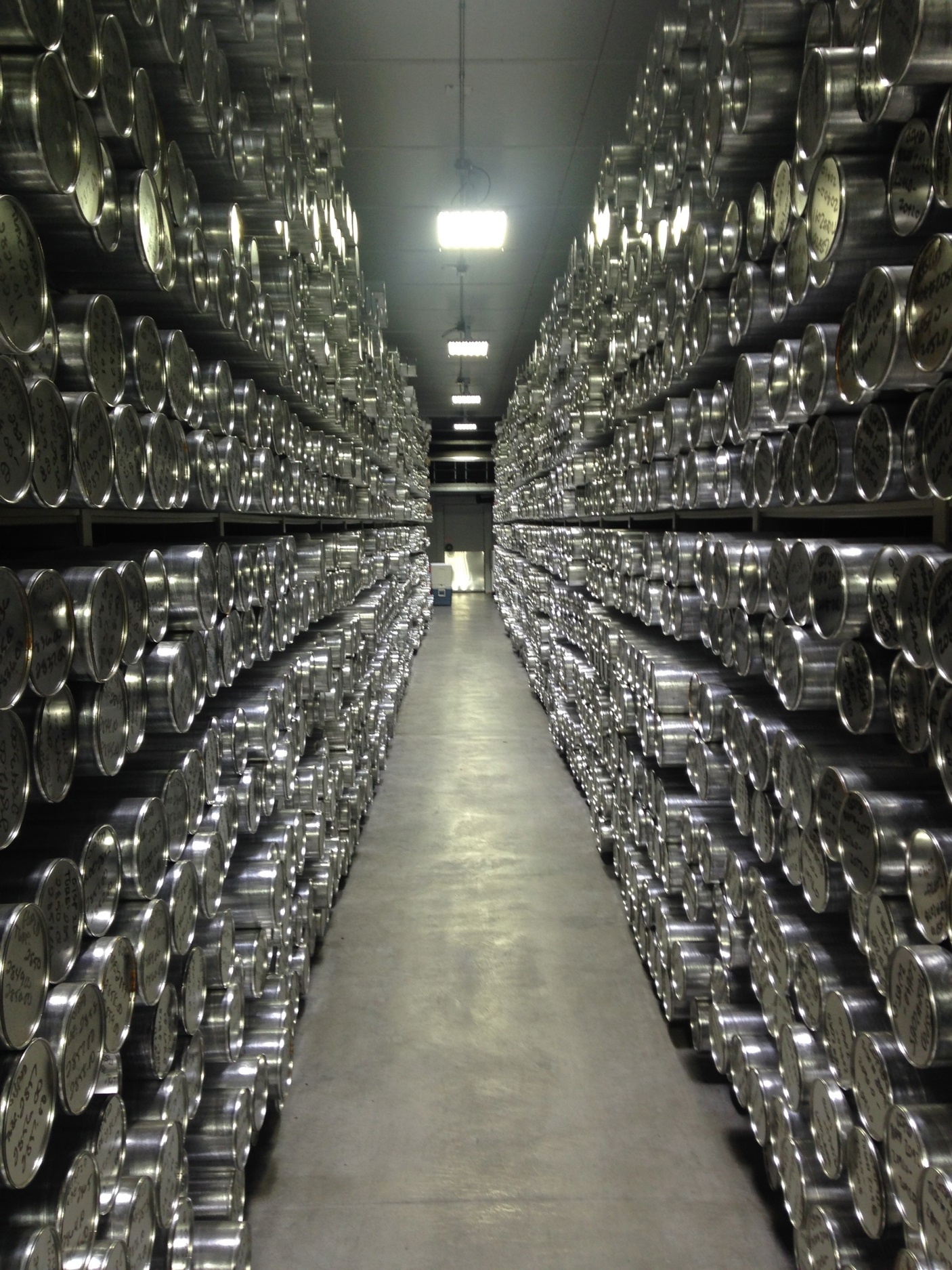 We spent the first half of our first day getting the lab tailored to our needs. Ensuring the equipment, such as the saws, and especially the imaging system worked. In the afternoon of the first day, we got into a rhythm with everyone having different tasks as the core moved along and leaving the opportunity for people to take breaks at different times. It was important to stay hydrated and take breaks from the cold at any point when you felt cold to avoid not only frostbite, but also disorientation especially since we were working with saws. As far as the science goes, the most important thing to remember when handling an ice core is to know where the top is! In order to keep this consistent as the core moved around the lab from person to person, we always kept the top to the right. There are very helpful arrows indicating the top direction drawn throughout the lab so you don’t forget.

The first processing step was handled by Richard, who removed the core from its original tubing and layflat from the field. He then measured the length, diameter, and weight of the core. Using a saw, he then removed the top centimeter from the core so that it was now flat on top. These cut off portions are called “wings” and were saved and bagged for later use. 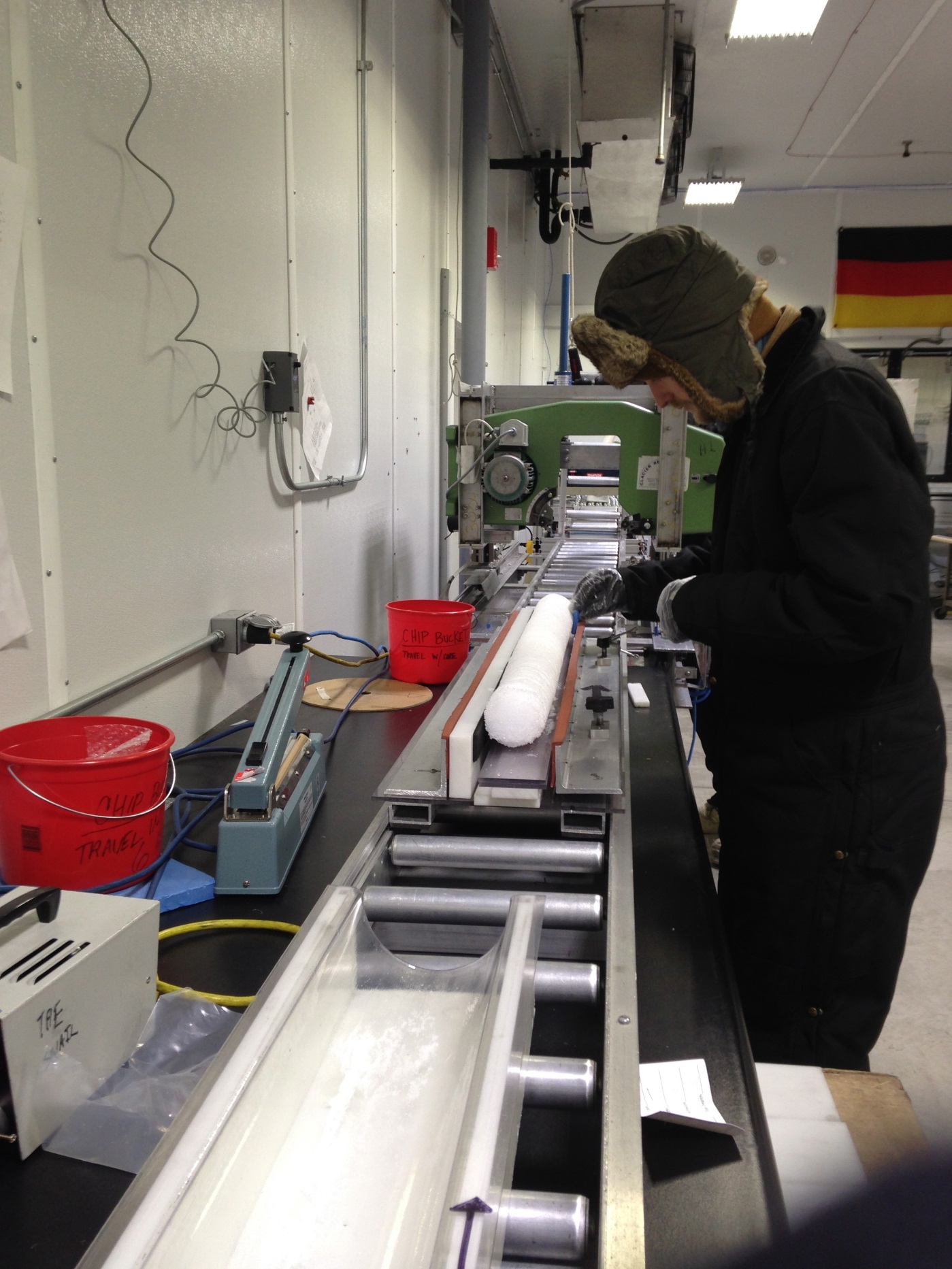 After measuring the core, Richard Nuun of NICL packs the core securely in the tray for the top cut. (Photo Credit: Sarah Das).

After the top portion of the core was cut off, it was digitally imaged. I turned to Luke for the following more detailed explanation of the imaging system at NICL. “The imaging system at NICL is an inline scanning system designed to create a visual archive of the core and allow for analyzing its physical properties.  You can think of it like a scanner or copying machine.  Each tube of ice core is placed on a tray and is slowly moved past a high-resolution camera sensor that records an image of the core at sub-millimeter scale.  Two LED lights on each side of the core illuminate features like melt layers, firn grain size changes, and cracks within the core. The images can be useful for analyzing annual layering (to determine how much snow fell in a year) and refrozen melt layer thicknesses (to determine how warm summers have been).”

After the digital imaging, Luke hand-drew some basic plots (on super cool meter-long graph paper made just for this!) of the core to take special care of noting what was a melt layer versus a break in the core, as they can sometimes be confused in digital form. 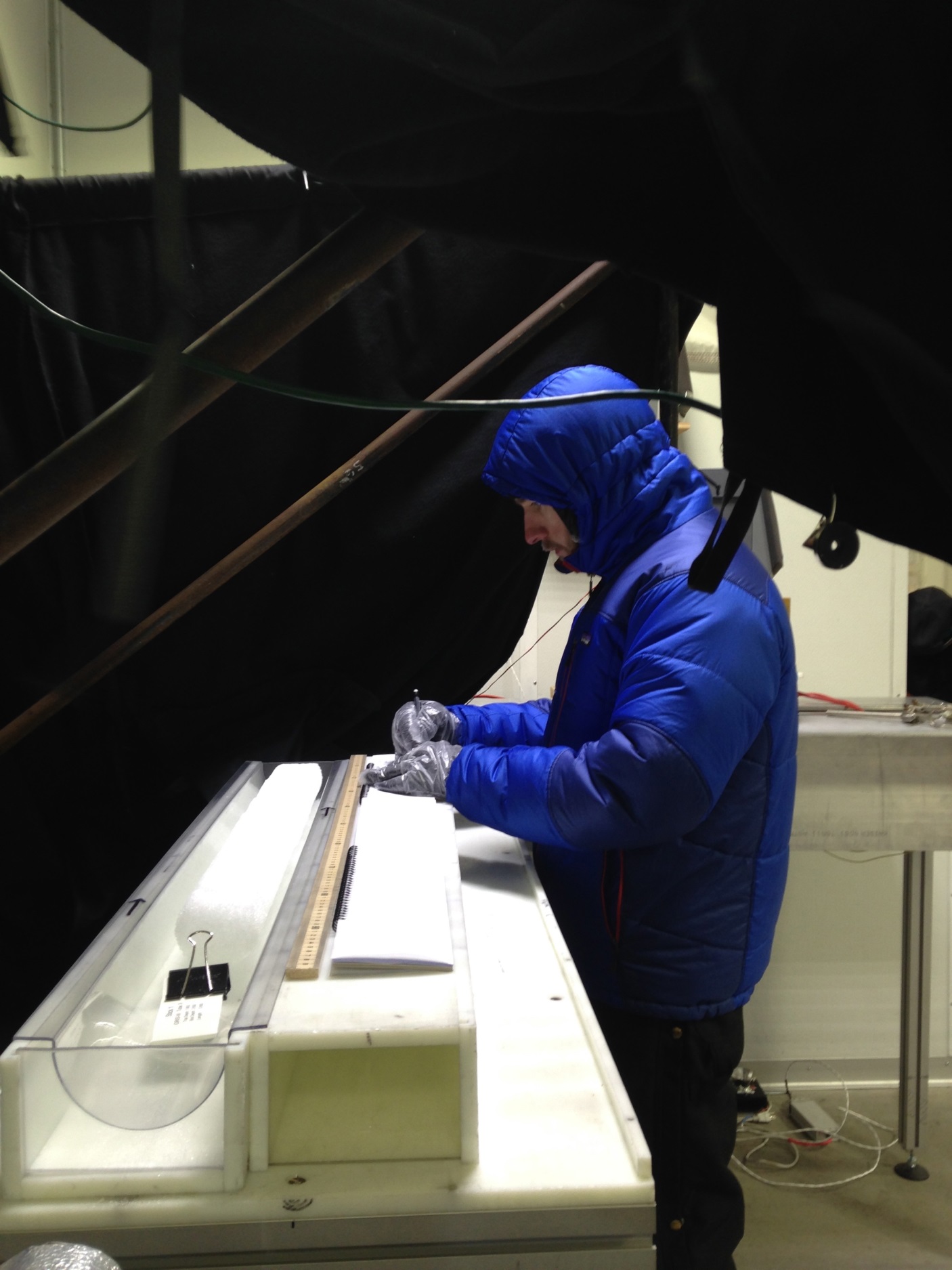 After Luke plotted the core, he passed it along to Sarah. Sarah cut the three round sides that remained on the core off, making the core into a clean 5cm X 5cm square the length of the core. She also bagged the cut-off outer wings for later use. 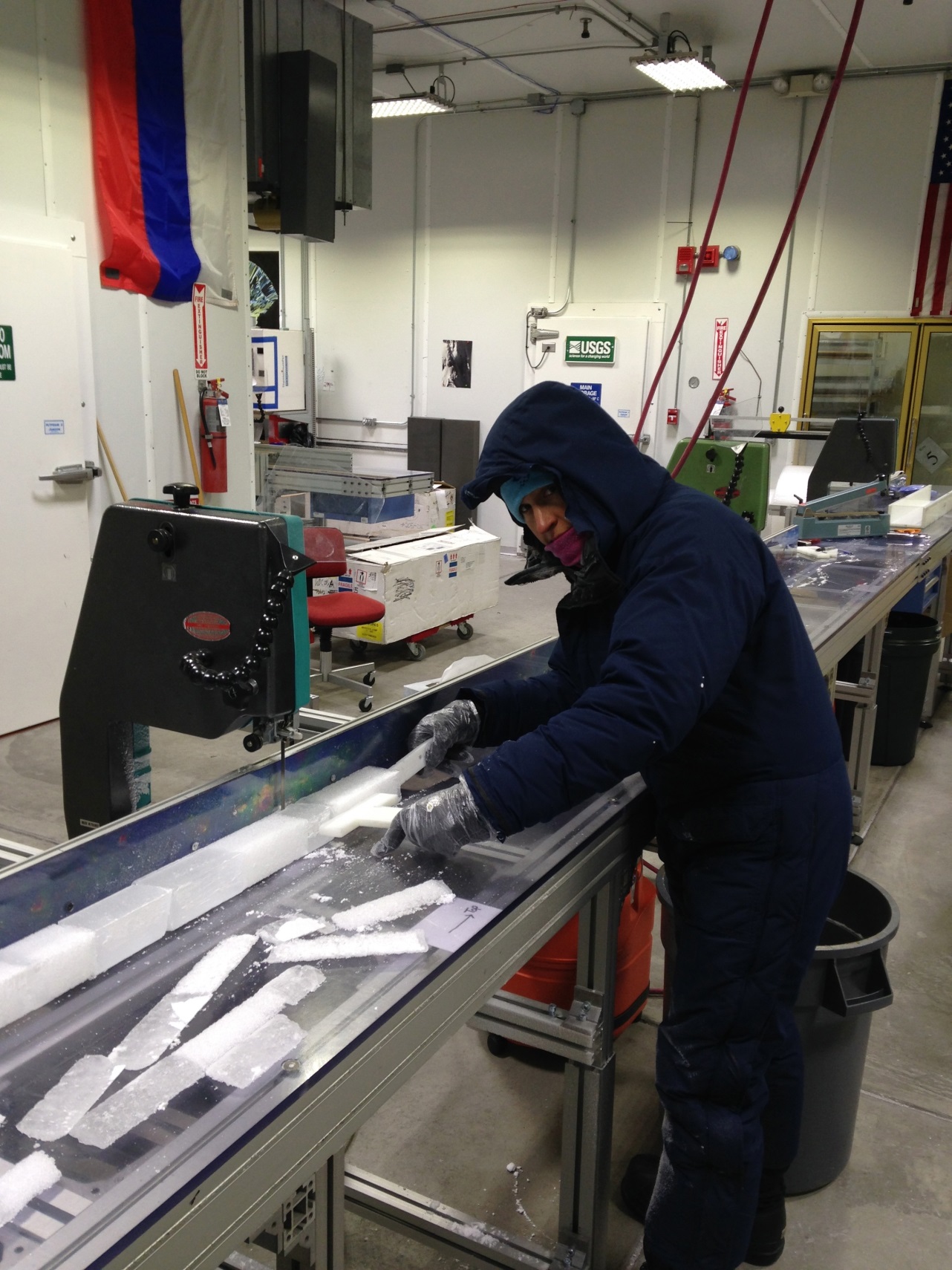 Sarah cutting the core down to be square. 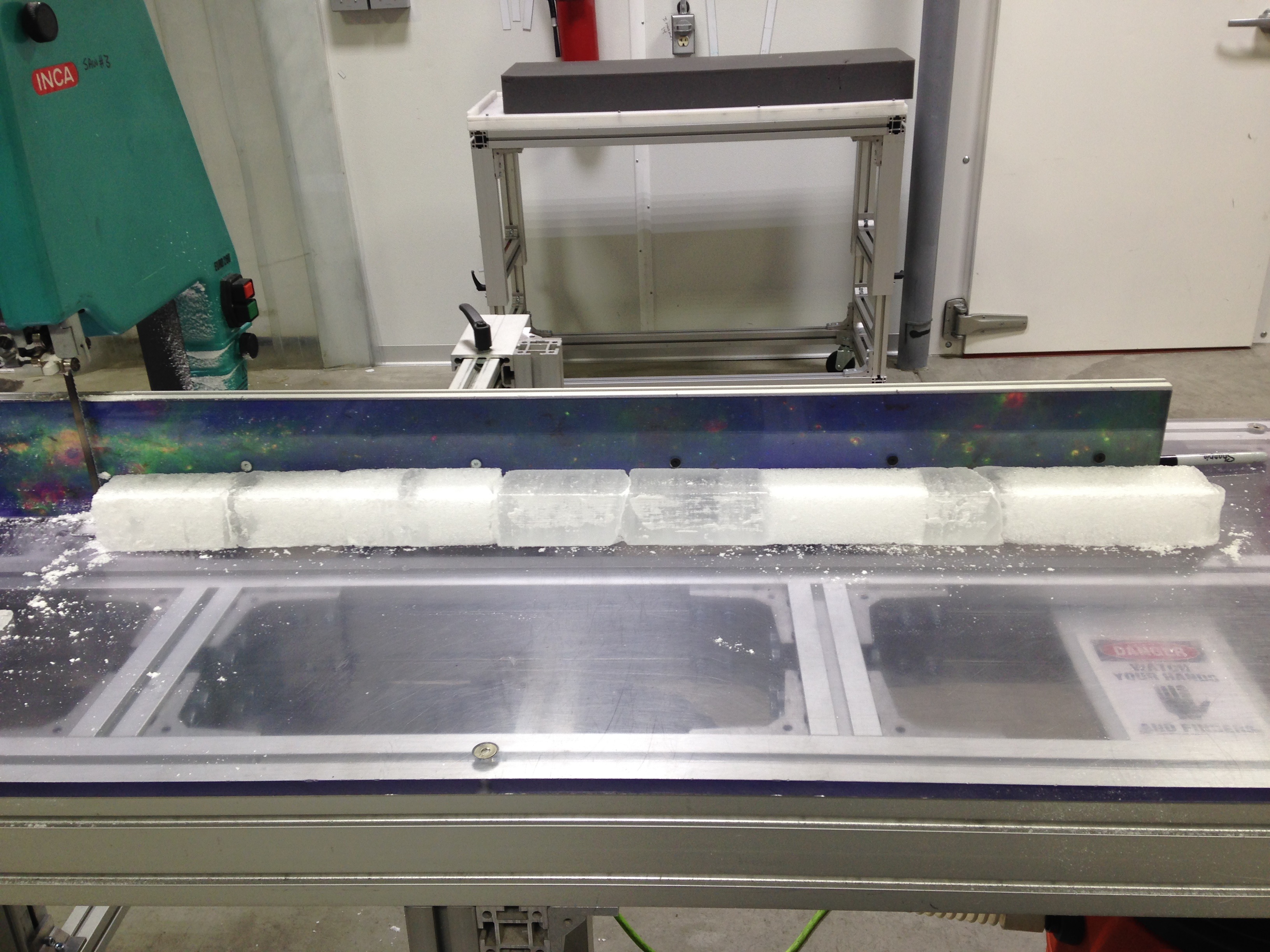 An example of the center of the core after all the outside edges have been removed. (Photo Credit: Sarah Das).

After Sarah cut the core down to be square, she passed it along to Luke who cut the interior square in half lengthwise, creating two 5cm  X 2.5cm sections for the length of the core. The first of these length-wise sections was bagged and saved for future use at Sarah’s WHOI lab. 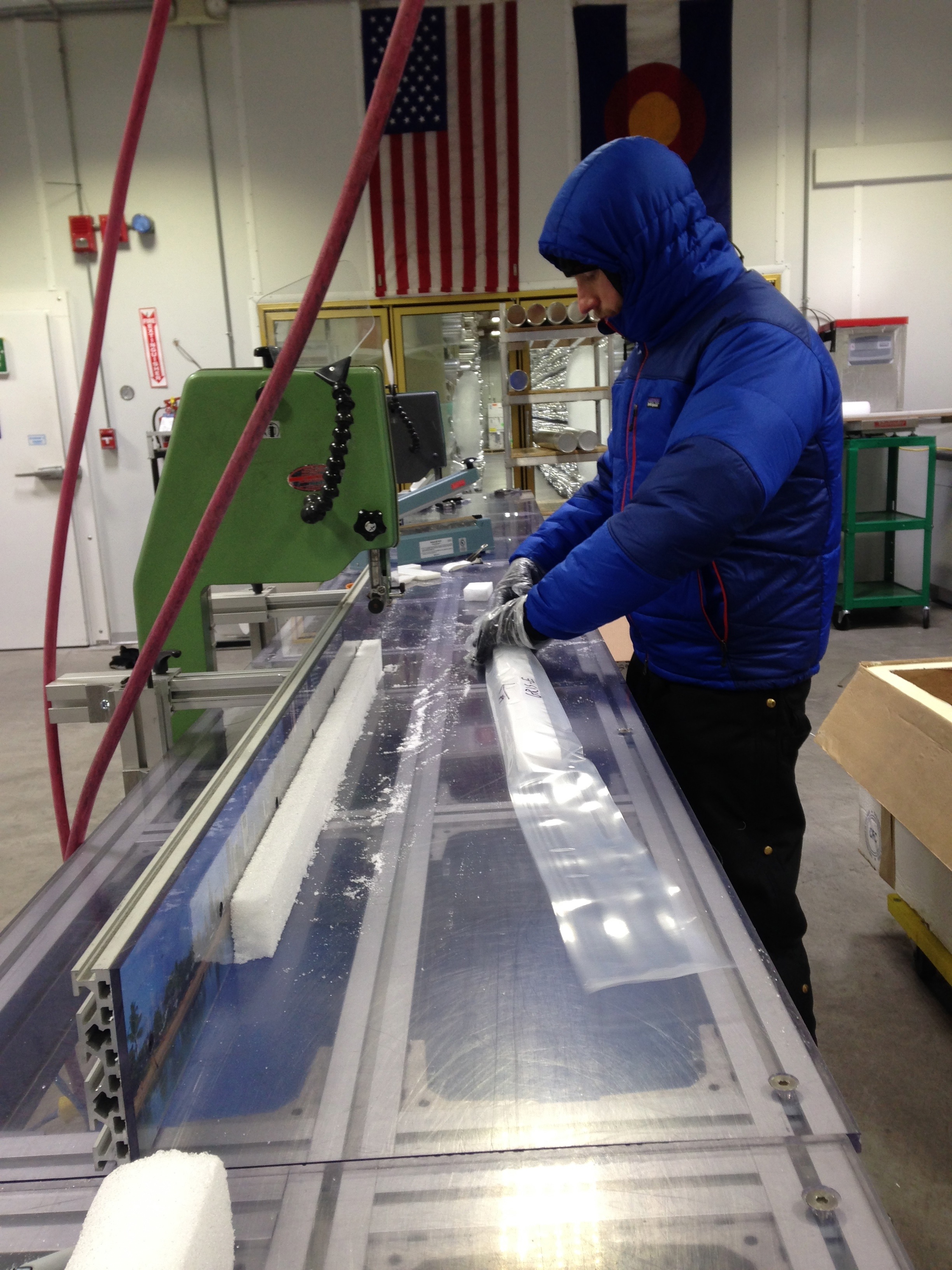 The second length of core was then passed to Oz and me. I cut the core into smaller 5cm X 5cm X 2.5cm discrete samples sections. 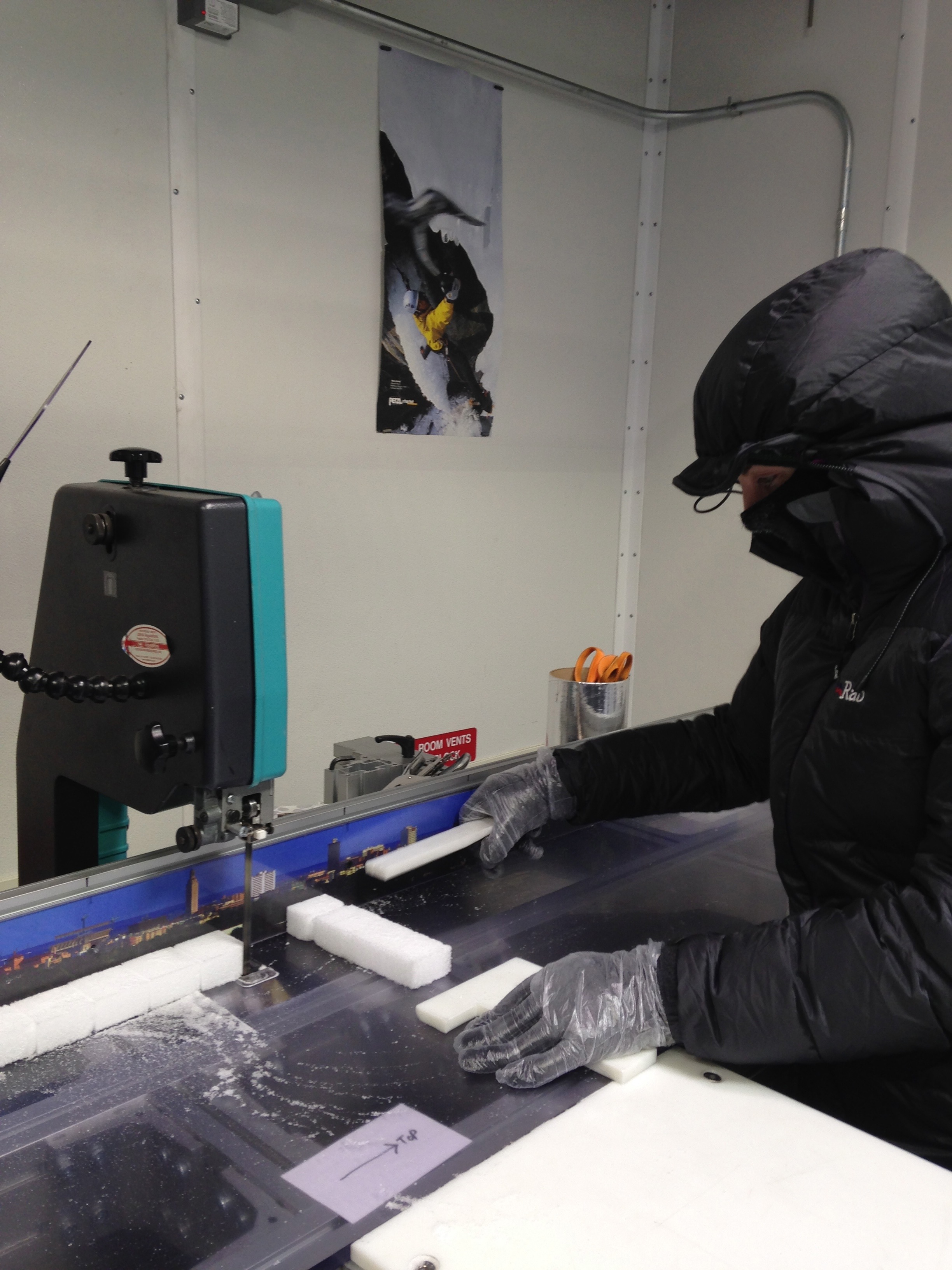 Oz then bagged these samples and we stapled labels onto the bag to know what site and depth they correspond to. 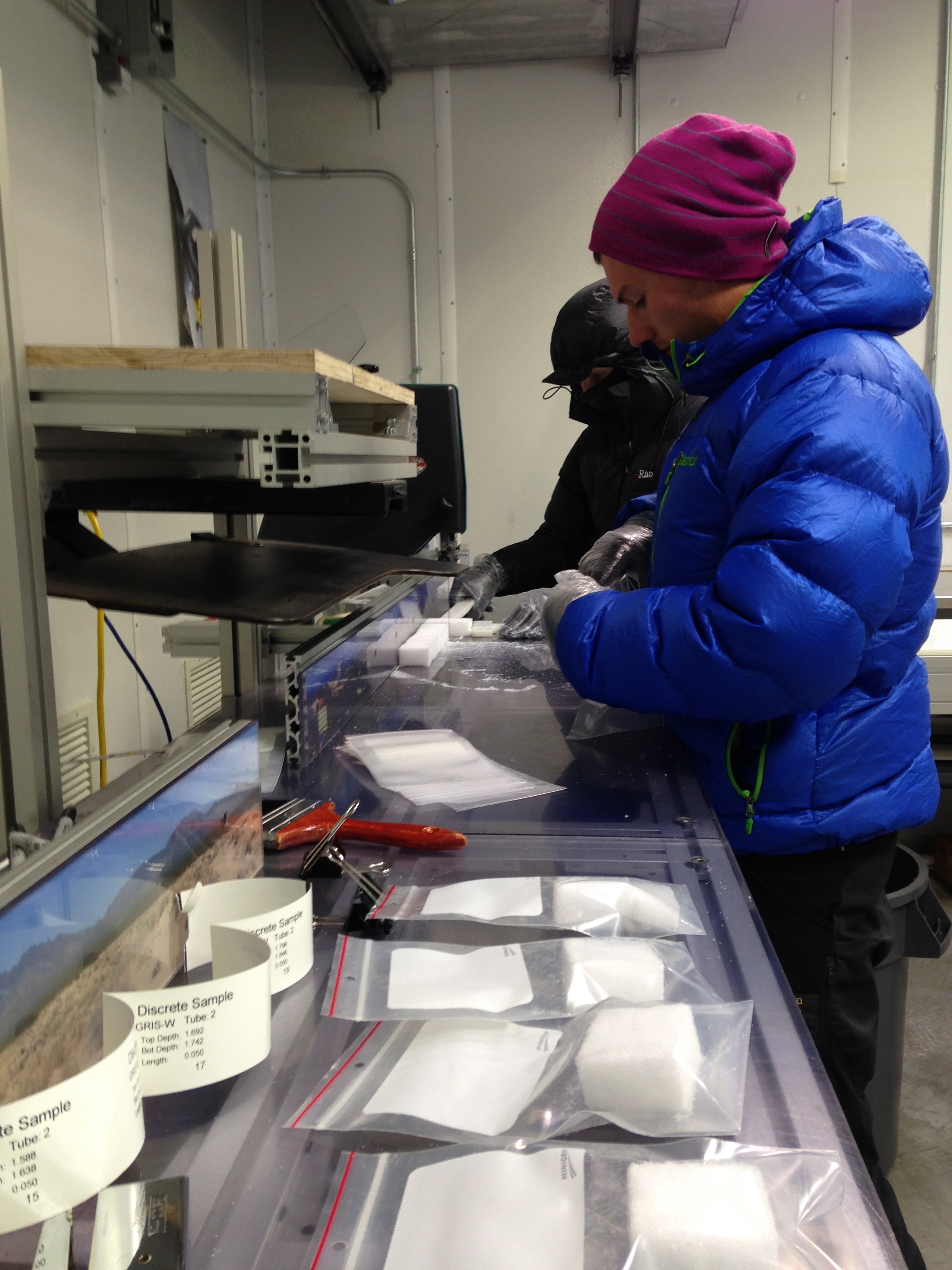 Once we had our jobs organized during the second half of the first day, we were able to power through most of the cores on the following day, and leaving only a few to do on the morning of the third day. We processed a total of about 33.4 meters of core taken from four different sites in Greenland. Next year we plan to collect hundreds of meters of core from three final sites. Needless to say, we expect to be spending a bit more time at the National Ice Core Lab next summer.