It’s snowing again.  If this was a ski town, tomorrow would be a sweet powder day.  Greenland in April!  It is most definitely still winter here though there are plenty of signs of Arctic spring.  The open ocean is free of sea ice (mostly) and the days are very long.  Even at midnight last night I could still see light in the sky behind the mountain ridge out my window.  Why was I up at midnight you might ask?

Well the last few days have been exciting and busy.  If you have been reading, you know that Thursday it was also snowing and we were pinned down in Ilulissat.  Friday we had planned to head up to our second ice sheet site around 1-2 pm, but the weather was clearing faster and the pilots told us to pack up ASAP, so we scrambled a little faster than we anticipated and got over to the airport.  As you can see in my Instagram photos (click the camera icon to the right), going to the airport is a little different.  We just drove right up to the plane and loaded our gear.  We had about an hour flight up to site number 2 and the further inland we flew, the better the weather got.  With the recent weather there was a little more moisture in the air and we could see our plane shadow on the ice sheet with a long straight shadow line stretched out behind-our contrail.Like last time, we landed on the ice and got to work.  Friday’s work was just like the last field day, but much warmer, minus 25 C instead of minus 32!  Still cold but it felt a lot warmer, at least at first.  Ben and Laura set off to do the geo-physics (GPS measurements and radar surveys), Ashley and I started the snow pit (but when they were done putting the “pajamas” on the Otter engines, the pilots went to town on the pit and dug a full 2m pit), and Sarah and Matt E (and yours truly a little) worked on the core.  By the end of the day we had sampled the whole pit (plus a few extra samples for my students at home), drilled 9 meters of core, and walked 6km of radar transects. 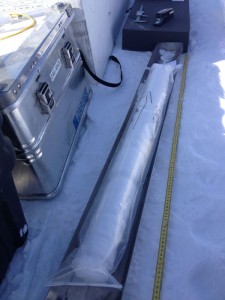 As you can see in the photos the moisture in the air made a very cool sun halo that I had fun playing with with the camera.  We left the ice about 7:30 pm and about 30 minutes into the flight back to Ilulisaat, the pilots told us that we would have to divert to Kangerlussuaq because one of the skis would not retract.  We would have to land on two wheels and one ski, which they assured us was not a big deal, but did require a longer runway.  The Ilulissat runway is quite short-only suitable for small prop planes-while the Kanger runway is long.  So we flew south to Kanger, and, sure enough, the landing was uneventful other than some sparks from the ski on the pavement.  The airport fire crew and the police had turned out though and, when we taxied to the tarmac, they all gathered round to have a look at the ski.

For us, this meant that it was now about 9:30, we had not eaten anything in a while, and all we had was our gear for the field because we were now several hundred miles south and an hour plane flight from our hotel.  Fortunately KISS put us up for the night and Jeff from Polar Field Services met us at the airport and shuttled us and our gear back to KISS for the night.

Our Otter pilots, who are from Iceland, were scheduled to be picked up at 8 am to be flown back to Iceland, so they arranged for that plane to shuttle us back up to Ilulissat and then return to Kanger to get our Otter pilots and fly back to Iceland.  So this morning we were up at 6 to pack back up and head to the airport.  We were not sure if all our gear from the Otter would fit in the new aircraft, a Beechcraft KingAir, but it did, and so we flew up to Ilulissat. 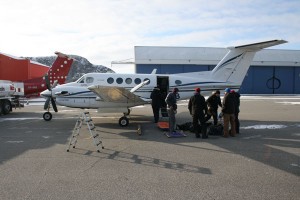 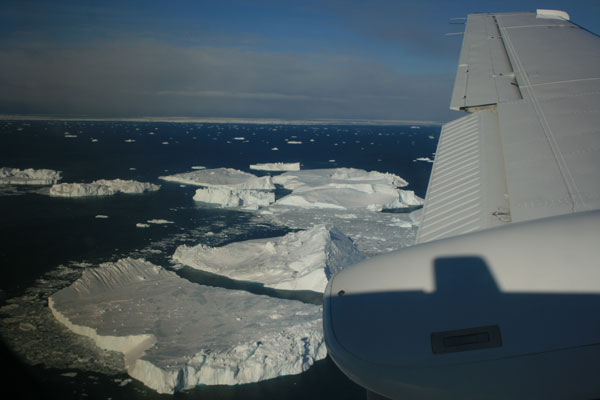 We were scheduled to fly to a field site on Disko Island today and had a helo booked, so as soon as we arrived we had to regroup and arrange equipment for that field site.  Unlike the ice sheet, this site is on a smaller ice cap and the terrain is largely unknown, other than to Ben who has poured over high resolution satellite imagery of the ice.  We are pretty confident that there are no crevasses in the area (based on the satellite imagery) but we need to be careful, so we got all our glacier travel equipment ready (harnesses, ropes, anchors, hardware, etc).  We also needed to organize a fresh set of coring and sampling supplies.  By about noon we were ready to fly and Ben, Laura, and I boarded the A-Star helicopter with our Danish pilot, Peter.  We had determined that we would be the most experienced rope team in case of crevasse danger and, because the chopper can only carry three of us at a time, we would go out first and do a quick box grid of the landing area with the radar to be sure it is crevasse free before the coring team arrived on the second flight.  So off we went, flying out over Disko Bay toward Disko Island. 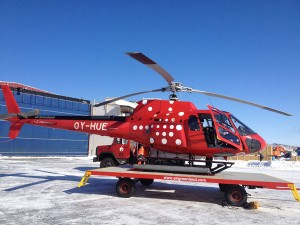 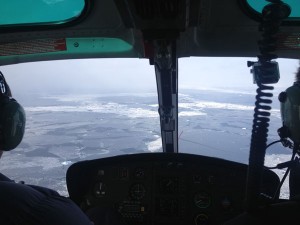 It was a beautiful day . . . but not on the island.  As we got closer and closer, it became clear that the island was mostly shrouded in cloud.  Peter tried to find some holes in the clouds and even took us up to 8000 ft to look over the cloud deck but the ice cap on Disko was socked in and we had to return to Ilulissat.  We did get a nice flight over the ocean with its myriad of different sea ice textures and took a pass past on the massive ice bergs out in the bay on the way back, but we were all bummed to not be out doing our science work. 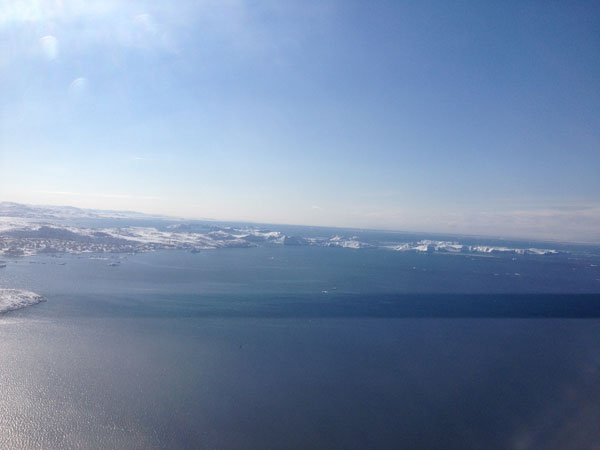 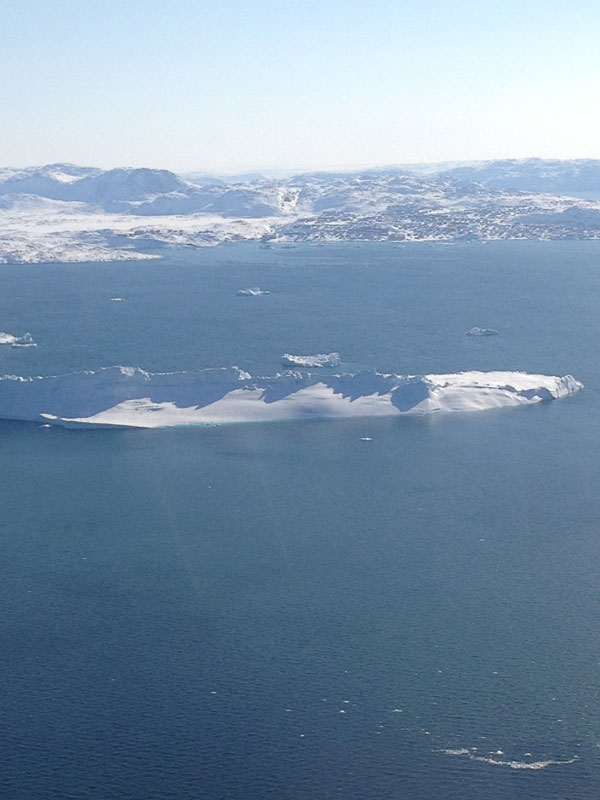 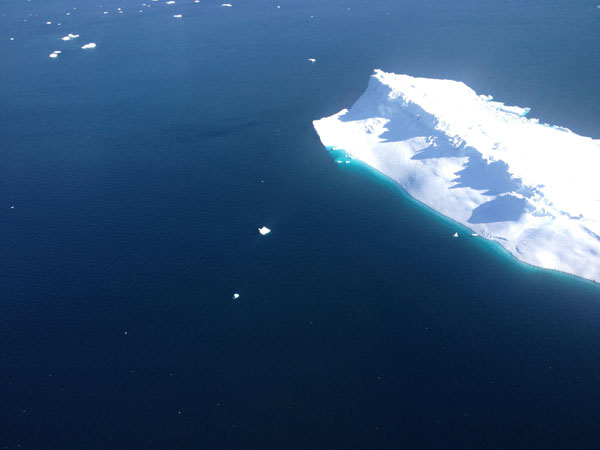 It is clearly a lot of work to get here and get all the logistics set up so we are eager to do the work we came to do.  At the same time, it has become clear to all of us (Sarah knew this already) that there always has to be a plan B, and C, and occasional D.  As Sarah said today, plan A is always the best one, but you always have to have a backup.

So we were all back in Ilulisaat by about 2:30.  We returned to the hotel and then decided to go for a walk through town and out to the tip of the peninsula that Ilulissat sits on.  From there you can see the huge ice bergs that come out the Jakobshavn fjord.  They get stuck on an old underwater moraine where the fjord meets Disko Bay and there they sit and slowly melt until they are no longer grounded (stuck on the bottom) and can float north on a counterclockwise current around Disko Bay.  When we first arrived, a long flat berg was behind the hospital out on the little point near our hotel.  Two days later it has drifted out in front of us.

Our hike took us out of town past the many dog teams that call the outskirts of town their home.  Most are used for tourist operations, but at one point in time, dog teams were the primary mode of transportation of the Greenlandic people.  There were probably a hundred dogs out there and at one point many of them started howling like a pack of wolves. 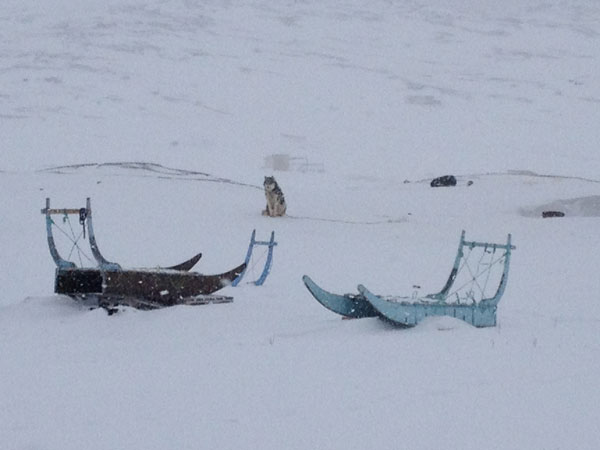 We hiked out to the point but by the time we got there it was snowing pretty steadily and the nice sunny day from the morning was gone.  The clouds we ran into early in the helo ride had pushed across the bay and descended on us.  We could still see the huge bergs but they loomed in the gray cloud and snow rather than shimmering in the sun like they had earlier in the day. 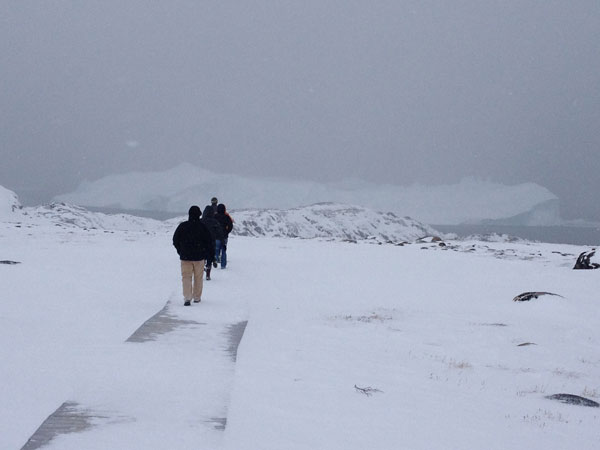 Now that it is after dinner, it has probably snowed 4-5 inches of fluffy powder.  Matt, Sarah, Laura, and Ben are playing cards.  Tomorrow the Easter Bunny comes so we have a down day for the holiday.  We plan to head back to Disko on Monday, weather permitting of course! If not, plan B . . . .