We didn’t run 26.2 yesterday but a shout-out to all our Boston friends who did.  Today was the Boston Marathon and while the elite runners were leaving Hopkinton, the Disko team was headed for Disko Island.  After our aborted flight on Saturday and a nice down day for Easter, we were looking forward to a good weather day, and today did not disappoint.  It was blue sky and sunshine, just like our ice sheet days and even a little warmer, only – 17 C when we landed!  Like Saturday we decided that Ben, Laura, and I would go first as the radar team.  That would give us a chance to get started on the radar, which has tended to take longer than the coring and snow pit work.  A grid pattern around our landing site would also allow Ben to give us a good idea of whether there might be hidden crevasses under the snow that would pose a safety risk (there were not).  Because we were unsure of the crevasse danger we had decided to take a party of three as a rope team.  So Ben, Laura, and I geared up with harnesses and glacier travel equipment and boarded the helicopter with all the gear we needed for the radar surveys. 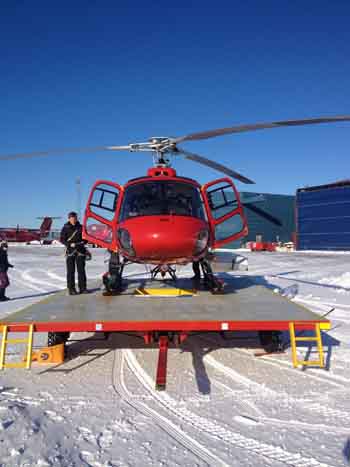 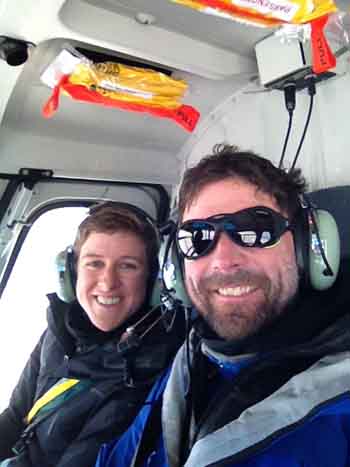 An hour later, a spectacular helicopter flight over Disko Bay and the eastern part of Disko Island put us on the ice cap on top of Disko.  We overflew the site once and then Peter, our Danish pilot, gingerly put the A-star down on the snow.  Landing on snow, he told us, can be delicate because the helicopter can sink into deep snow.  The snow here was firm though and we touched down without a problem.  Just to be sure Peter packed the snow with the ski skids by gently “bouncing” the helicopter on the snow surface. 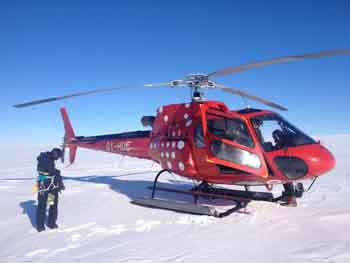 Once we had unpacked and moved our gear pile a respectable distance from the chopper, Peter fired it up again and lifted off to go back for the rest of the team, leaving Ben, Laura, and me on the southern Disko Island ice cap, a site we had named “Disko South” (last week we had decided not to visit Disko North because Ben’s recent analysis of satellite imagery was that it was too heavily crevassed). 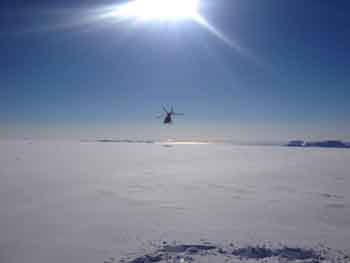 Honestly, that was pretty cool-to be alone on top of the island.  Just the three of us with no one around for miles. 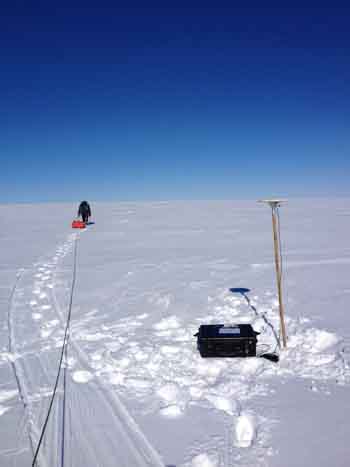 But it was time to work so we set to it!  Laura got to work on the first GPS station.  To install the GPS, we drill a hole with a power drill and insert a bamboo pole in the hole.  A UFO shaped GPS antenna is then placed on top.  Once connected to the battery and GPS unit, which are inside a big Pelican case, this set up will record the position of the pole at the millimeter scale.  By leaving it running for 20-30 minutes, or longer, Ben can get an idea of how fast the glacier is moving.  (Laura uses similar units for another project on the Greenland Ice Sheet melt-water lakes-her units are left out for a year and are powered by solar panels.  She will be going to collect them this summer. )

While Laura worked on the GPS, Ben got his radar systems set up, and I probed the area with an avalanche probe to look for hidden crevasses.  We were pretty sure that the ice cap was crevasse free, but we needed to do our due diligence.  I also laid out the climbing rope such that Ben and Laura could tie in at each end with me in the middle.  When Ben was finished we set off with him towing the ground penetrating radar (GPR) which gets good imagery of the shallow snow layers, me towing the ice penetrating radar (IPR) which can measure ice thickness all the way to the bed, and Laura towing a sled with another GPS in its big Pelican case, bamboo, and the drill. 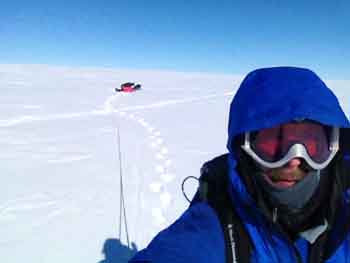 That is Ben working in the front with the orange ground penetrating radar. 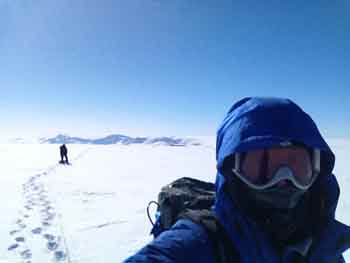 And Laura in the back with the mountains of Disko Island behind.

For the next 1-2 hours we walked a big grid around our gear pile, finishing shortly after Sarah, Matt, and Ashley arrived with Peter.  It was fun to watch the helo come over, bank around, and touch down in a cloud of snowy rotor-wash. 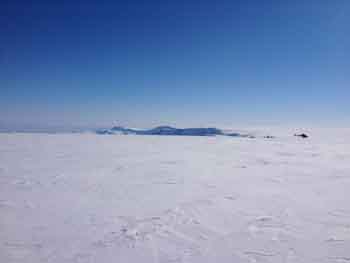 After a break in the helicopter, I did a little coring with Matt and Sarah and then Laura and I helped Ashley finish digging out the snow pit.  This pit went down to 1.6 m before we hit a hard ice melt layer.  The snow above the ice layer, with the exception of the windblown slab on the surface was largely recrystallized into large ice crystals, the texture of very coarse sugar.  Shoveling it was relatively easy, but if you threw it too high behind the pit the wind would blow it right back on to you! 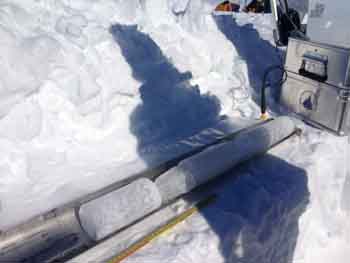 By this time Ben was ready to head out for more geophysics work so we roped up again and then worked steadily for about the next ~4  hours doing more grid lines up and down the ice cap.  The cap here has a gentle slope and Ben wanted to go up and down the ice flow lines.  Even though it was just a gentle slope up, it was hard work especially because the snow surface was variable-sometimes hard, sometimes soft.  We were frequently breaking through the snow 4-5 inches which made for something of a slog.  By the time we were done the other team had left on the first chopper ride down to Qaarsut.  We had about ½ hr to regroup while we waited for our pick up.  We were pretty beat from 5+ hours of trudging through the snow pulling sleds.  So while we didn’t run a marathon on Marathon Monday, it felt like it by the end of the day! The physical labor and the odd combination of both relentless cold and sun really takes it out of you.  We did take a moment to pose for #GlobalSelfie, an Earth Day project by NASA.  We posted it today on @goodnesglacier, Laura’s Twitter.  NASA’s IceBridge data was instrumental in helping Ben pick the specific coordinates for our field sites as well as the radar survey lines.  Before we departed “Disko South” we flew about 1 km up the ice the retrieve one of the GPS set-ups.  It is pretty cool how quickly the A-Star can start up, fly some place, and shut down again.  Had we all had a little more helicopter experience, Peter said he would have just kept the rotors turning while one of us jumped out and retrieved the GPS. 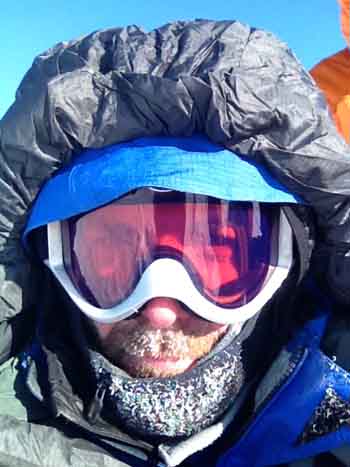 Cold air makes your breath instantly freeze to your hood, and your mustache.

From Disko to Qaarsut was about 45 minutes and it was probably the most amazing flying experience of my life.  On this trip alone we have flown a C-17, a Twin Otter which we landed on the ice sheet and landed on a runway with a ski that would not come up, a King Air, and now the A-Star.  I have flown in a small fixed wing and a helicopter through the mountains of New Zealand and I have flown in a helicopter through the Swiss Alps.  Those were both amazing but this flight was over the top.

First we flew over the northern part of Disko Island and then out over the ocean towards the Nussuaq Peninsula, crossing varied sea ice and a few ice bergs.  Nussuaq is much more dissected by glaciation compared to Disko and the mountains were craggy and beautiful, with horizontal volcanic layers making it look like the peaks of the Canadian Rockies 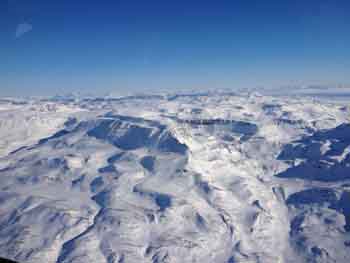 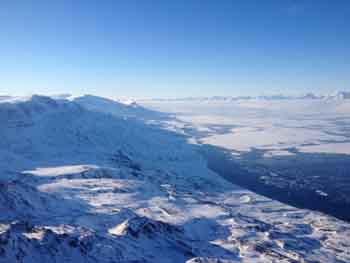 Leaving Disko to cross the fjord to Nussuaq 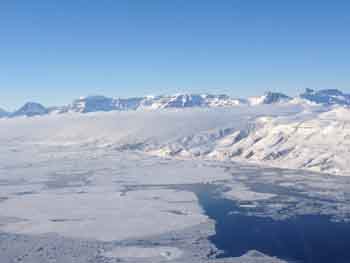 Cloud layer rolling up the fjord from the west. The prow shaped mountain crag in the middle is in the next photo as well. 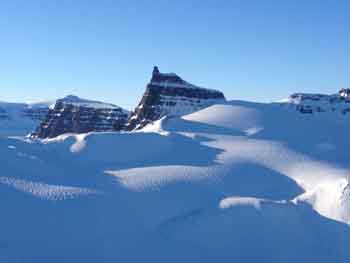 Every time we crossed over a mountain pass we were treated to yet another spectacular valley often with a glacier spilling down into a valley.  The A-Star is slow compared to most other aircraft and it flies low; couple that with a wide windscreen and you get a unique ride through spectacular wilderness terrain.  It was unbelievable.  And just when we through it couldn’t get better, we swooped down to the Qaarsut airport which sits on the northern edge of the peninsula looking out across a wide fjord to massive fortress-like, cliff-faced islands on the other side. Very dramatic!

Coming in to the Qaarsut airport

We were told ahead of time that we would be staying at a small place (maybe a hotel, maybe a place that puts up pilots) near the airport; it turns out to be a wonderful little hotel run by Ip Larsen with private rooms and bathrooms and a great common room with a view out over the ocean.  It was so nice to end a very long day with a hot shower, an excellent home cooked meal, and a nice warm bed!  After downloading photos and writing part of this blog, I clicked this last photo right before bed, at 10:15 pm! 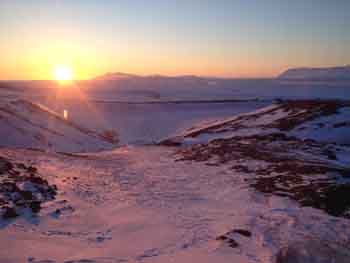