Navigation Menu
Home » News » Holy _______ ! The continuation of The Most Ridiculous Day Ever at Nuus 2.

You can fill in the blank with whatever you want, but “holy something,” yesterday was spectacular!  After sitting in the clouds for two days, we got to sit on the top of those clouds for the whole day.  Low coastal and valley cloud was thin enough for Peter to get the helicopter above it and to our first field site on Nuussuaq Peninsula.  Ben had identified several sites on Nuussuaq and numbered them.  For the last two days we had been talking about which sites to prioritize and “Nuus 2″ got the call.  These sites are very different from the Greenland Ice Sheet.  The GrIS where we worked is just vast and flat in all directions.  The Disko and Nuussuaq sites are small ice caps on top of mountainous terrain.  I usually thing of an ice cap as been a pretty large area of ice “capping” a similarly large area of last-kind of like a mini-ice sheet but not nearly big enough to get the “sheet” designation.  But the caps on Nuussuaq are quite small-more like an “ice plateau” on top of a mountain.  The Disko site is big enough to land a Twin Otter on, but not Nuus 2.  We walked around the whole thing in about an hour and the slopes were much steeper.  It only took a little bit  of walking away from our work site before we were too far downhill to see the other folks.  In fac,t at one point we asked Peter to move the helo down to one of our GPS sites.  When he was in the air we realized that we were much closer than we thought; after he moved the helo we ended up back at the work site and, even though the helo had only moved about 100 yds downhill, we could not see it.

If you have been reading other posts you know to also hit the Instgram link to the left to see more photos.

You also know by now that we have been doing the same work at each field site: 1) drilling a core (usually about 5-9 meters deep), 2) digging a 1-2 meter snow pit and taking two sets of samples-one for stable isotopes (H and O) and density (rectangular holes), and one for MSA, Cl, and other chemistry (round holes), and 3) doing radar transects to map the subsurface ice layers and thicknesses and taking GPS measurements to see how the glaciers are moving and accumulating snow.  Because we have been repeating the same tasks, it has worked well to divide into teams of 2: Matt and Sarah core, Ashley and I (and the Twim Otter pilots on the GrIS!) dig the pit and sample, and Laura and Ben run the radar and GPS.

For the Disko and Nuussuaq sites, I jumped in with Ben and Laura so we could move as a rope team of 3, which is safer on glaciated terrain where the crevasse danger is unknown.  The auxiliary benefit of being on the radar rope is that you stay warmer moving around, and as you can see from the photos, you also get to walk all around the site and see the sites!  Because Nuus 2 is steeper, those walks away from the main work site quickly got you some unique views.

So today, Ben and Laura and I went up first.  The flight up the valley was just ridiculous in terms of scenery.  Like at Disko, Ben set to work on the radar set up while Laura put in the first GPS and I probed the area; we were very confident from Ben’s studies of hi-res satellite imagery that our landing site was crevasse-free but it seemed like a prudent thing to do anyway.  Once the radar was ready we set off on on our scenic walk.  We would walk following a GPS track that Ben had mapped on this satellite imagery on his computer and transferred to a handheld Garmin.  At the end of each track or “run” we would stop and Ben would reset his orange ground penetrating radar and Laura would reset the ice penetrating radar that I was towing behind me.  At each of these stops Ben would take off his pack, lay it on the ground,  and open it up to where his radar controls were located and I would fish out my camera and snap pictures.  As a result, most of my photos that have Ben in them show him “praying to the radar gods,” as he said. After the first radar circuit around the landing site, the helo came back with the rest of the team and they set to work on the other tasks.

At the end of the day, Ashley and Ben and I headed down to Qaarsut on the first flight down and organized gear for me and Ashley to take back to Ilulissat.  When the rest of the team came down, we said our goodbyes and then Ashley and I boarded the helo for the flight back with Peter.  As I explained earlier, Peter had to head back to Copenhagen today so he had to return to Ilulissat yesterday so he could catch a flight today to Kanger and then on to Copenhagen, plus our end-of -trip logistics got confused due to a number of factors that all converged.  Originally we were all going to come back to Kanger yesterday and today.  Because we were behind on field days due to weather, we were trying to use what would have been down days in Kanger waiting for the Air National Guard C-130 to take us home on Monday.  Right as we were trying to figure out if we could get a new pilot back to Qaarsut for the weekend, we found out that the C-130s were all grounded (world wide is what we heard) and that the first C-130 would be coming on Tuesday and then not leaving until Wednesday or after.  That meant that we needed to fly home commercially.  To complicate matters, there are only flights from Ilulissat to Kanger on certain days and the A-Star can only carry 3 passengers and a limited amount of gear.  Very long story (trust me!) short is that it worked best for me and Ashley to fly out with Peter and then fly down to Kanger today via Air Greenland (yet another aircraft-a Dash 8) while the rest of the team does one more Nuussuaq site and then makes their way to Kanger on Monday (because there are no flights over the weekend).  When we all meet up in Kanger we then fly to Copenhagen, spend the night, and then fly back to Boston via Newark (yeah Newark!), except for Ben who can fly to Iceland and then direct to Seattle.  Complicated!

So what follows is a string of photos showing the days events.

Peter, our pilot, with his machine. 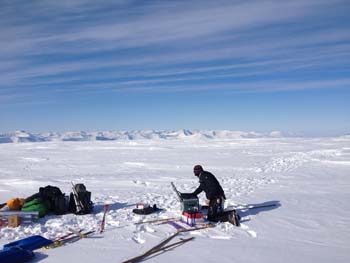 Ben prays to the radar box of goodies 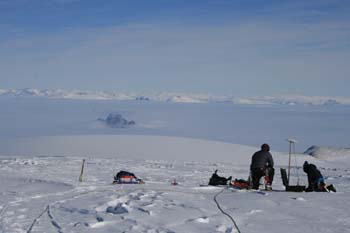 And to the GPS.  This was the most amazing view I think with the peaks sticking out the clouds. 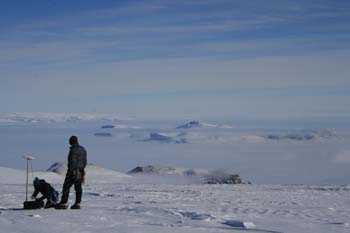 A little shift to the right for the rest of the view of the above photo. 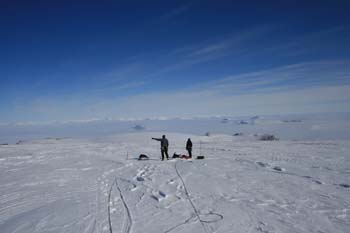 Plotting our next course. 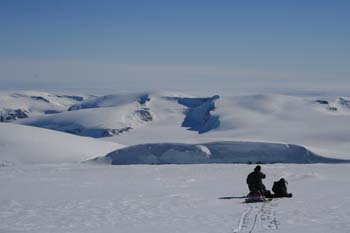 This is the real “Ben prays to the radar gods” photo.  I have lots of these photos. 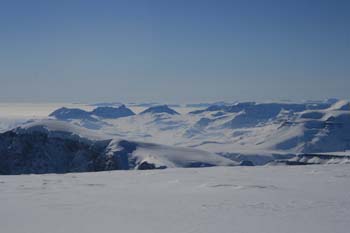 Tough place to be but someone has to do this science! 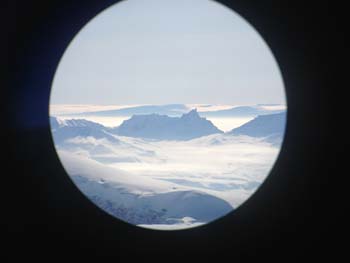 Hack-a-zoom.  I love this valley and this peak.  I could not stop trying to photograph it. 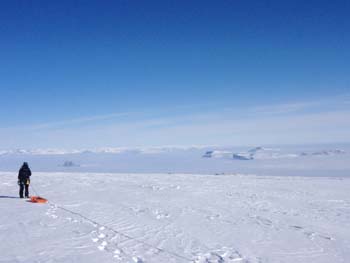 Laura takes in the view. Being a grad student has its challenges.  This is not one of them. 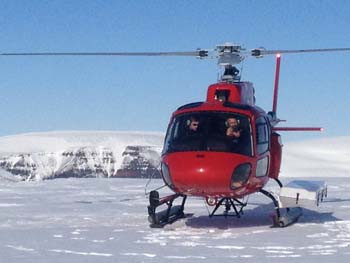 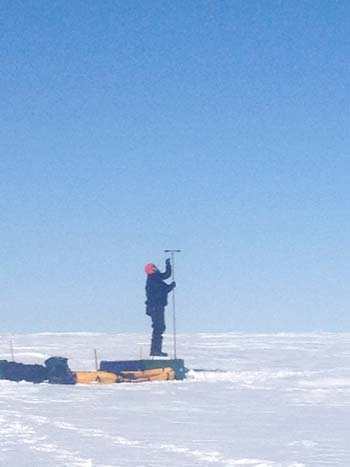 Matt E, aka the cosmonaut, drills into Nuus 2.  We pulled 11 m of core from the hole below. 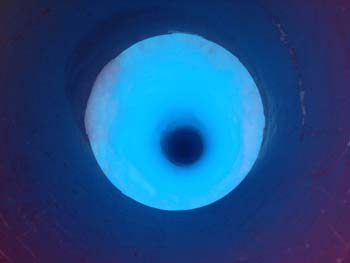 Looking down the hole.  Held the iPhone real tight! 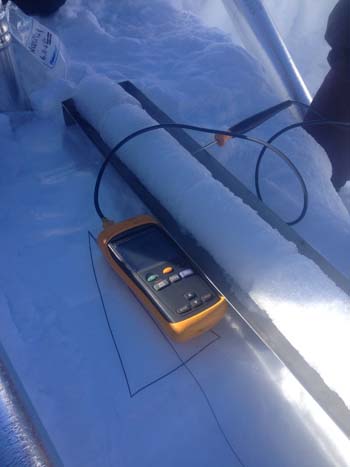 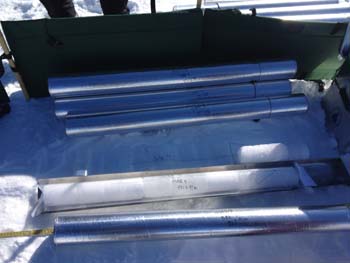 The tubing that the core goes into is called “lay-flat.” It is flat but hollow.  It gets stapled at one end and labelled so that when core is ready, it can be slid in.  Then it goes into the silver core tube and eventually into an insulated core box to be shipped cold back to the US. 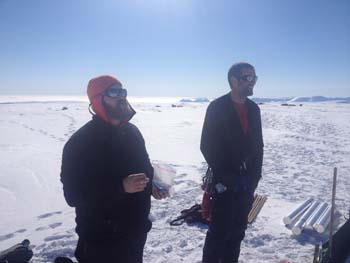 “Comrades, you must eat to stay warm!” 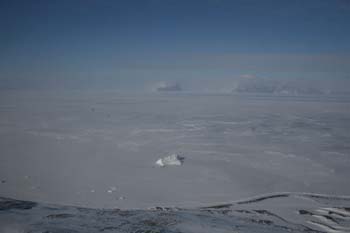 Flying back down to Qaarsut.  Out in the distance are the huge rock fortress islands whose tops were sticking out of the clouds and in the foreground is a large iceberg frozen into the sea-ice. 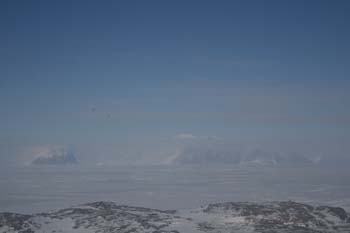 That rock cairn on the right of the foreground peak is the one we hiked to two days before when we were grounded in the weather. 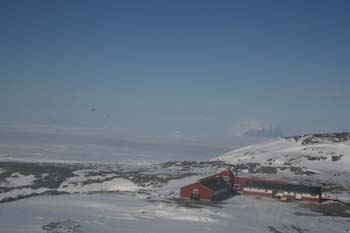 Peter slowed down so I could get this shot of the airport hotel without the big water tank next to it. 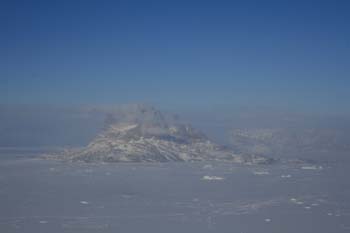 After refueling in Qaarsut, we took off back to Ilulissat.  On the right of this island is a town called  Uummaannaq. No I did not hold down keys-that is how it is spelled. Greenlandic is full of a’s, u’s, i’s, l’s, t’s, and m’s and n’s.  Very cool language to see in print. 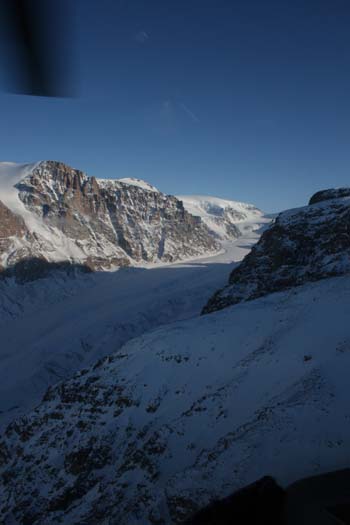 Then we turned up this valley and flew right back past our field site and up over the clouds on the other side. 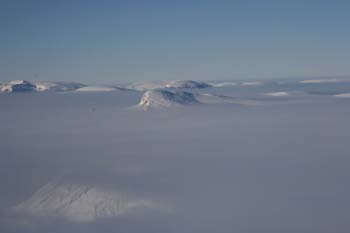 Peaks coming through the clouds. 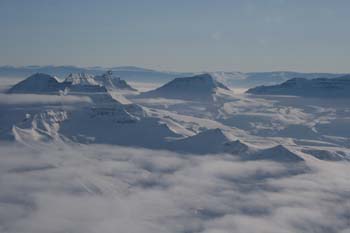 My favorite valley and peak wrapped in clouds. 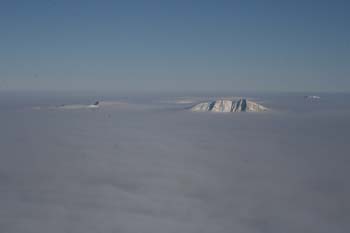 Islands in the sky. 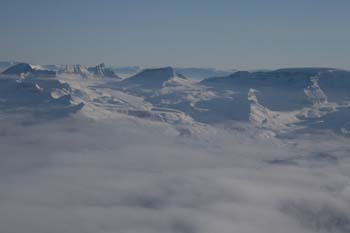 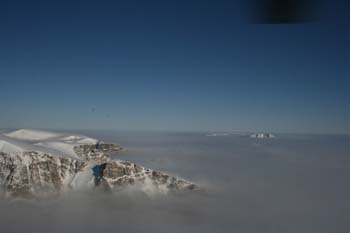 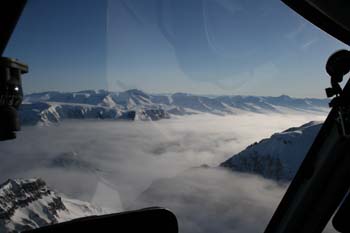 Looking up a long valley that cuts through the peninsula. 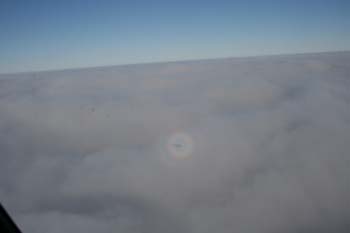 As we got out over the ocean the clouds thickened and Peter took us down to the cloud tops to look for a hole.  Along the way we got chased by the helicopter fairy. 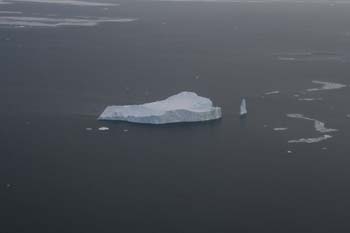 After Peter found a hole and dove down through it (a little stomach in the throat!) we spotted this gem! 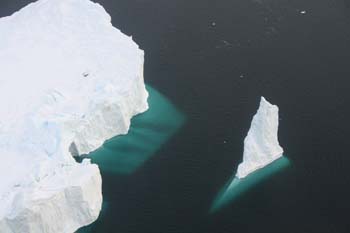 90% of a berg is underwater so we are seeing both the “tip of the iceberg” and the tip of the bottom.  Presumably these connect below were we can see. 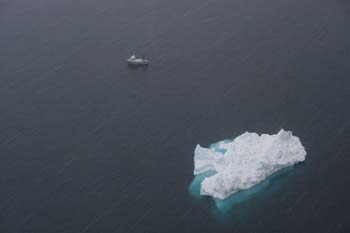 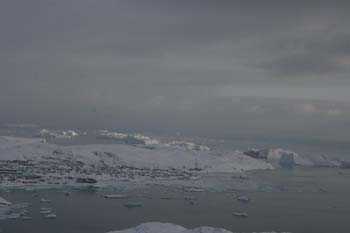 Ilulissat with the truly colossal Jakoshavn bergs around the point.

Parting shot on a gorgeous day.