It is Wednesday and we are on our second day in a row of being shut out by the weather.  Yesterday it was low cloud ceiling and high winds; today the wind has abated but it has been snowing lightly since last night and the clouds are all over the mountains above us.  As I think I have said before, Peter, our A-Star pilot, has to be able to see the ground at all times.  So any cloud scenario that inhibits that view keeps us on the ground.

Yesterday and today, I posted some photos from the Qaarsut area to Instagram (camera icon on the right).  Qaarsut is the closest thing we have seen to what remains of traditional Greenlandic culture so check out the photos of the dogs, drying fish, and frozen seal and whale meat.

Compared to our field days there isn’t much else going on, so . . . I thought I would post something about our Easter in Ilulissat a few days ago.

The day started with the arrival of the Easter Bunny who left some treats outside our doors (see my earlier post for photos!).  We then had a pretty lazy morning before going for a walk around town.  We visited the local museum, the first floor of which is full of Emanuel Petersen paintings.  Apparently he is well known for his paintings Greenland in the early 1900s.  I also like the name.  My maternal great grandfather was Christian Petersen, from Denmark.  The paintings give a good idea of what one would have found in the earlier days of exploration of these areas (at least early exploration of Europeans-the Inuit and Vikings were here well before that). 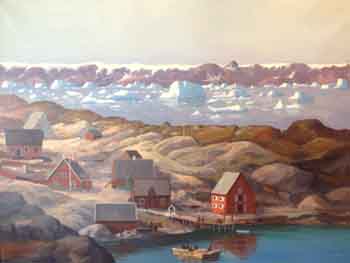 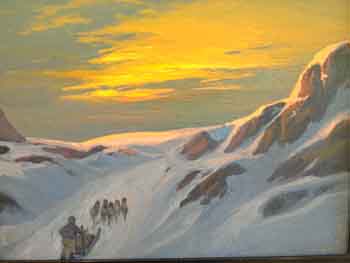 Upstairs in the museum were some nice, more modern and abstract paintings and some sculpture.  I especially liked the one shown below of an Inuit face carved from a whale vertebrae. 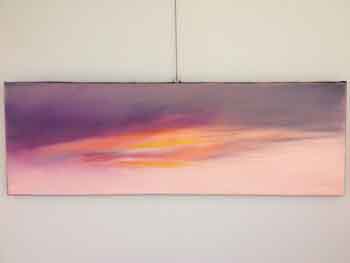 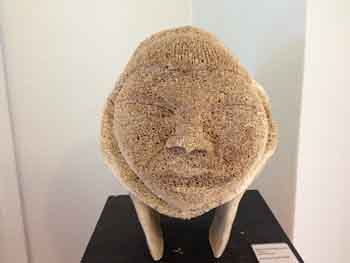 After the museum we went to a small local artisan shop that Sarah knew about.  The men working there were all Greenlandic and spoke limited English.  They carved figures, animals, etc from caribou antler, bone, and narwhal tusk.  Sarah and Matt bought a few nice things and I got a kayaker trying to spear a narwhal.

After that we split up and Matt and I walked back out to the “boardwalk” trail at the edge of town to look at the giant icebergs that calve from the Jakobshavn.  We had all been the night before, but it was starting to snow then and we did not see that much.  Easter Sunday, though, was beautiful though and we were treated to an up close and personal look at these monsters.  We even got a “lecture” from a “very knowledgeable” Frenchman about why we did not need to worry about climate change because it is all part of “natural cycles” like sun-spot activity and the tilt of the earth.  That was right after he expounded for a while about how much the Jakobshavn was retreating.  Hmmmm….

This is the walk out to the view point of the huge bergs.  All that ice in the ocean is ice bergs. 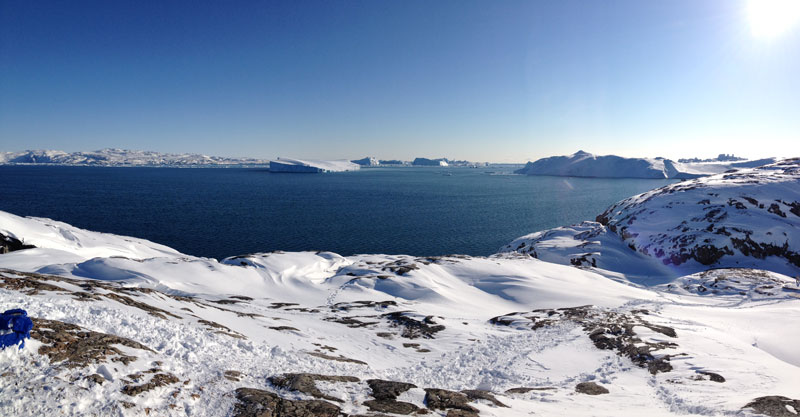 This is the main lookout point.  The Jakobshavn Glacier is to the left way up the fjord.  These bergs probably calved off last summer and drifted out here where they got stuck on a shallow spot where the fjord meets Disko Bay. 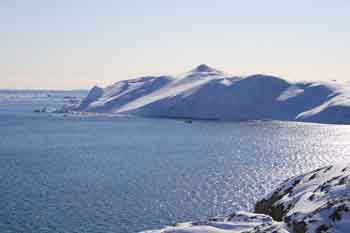 It is hard to appreciate scale here, but that is a tourist boat in front of the berg.  It holds about 25 people. And the photo below is the right hand side of the same ice berg.  And 90% of the berg is under water.  Massive! 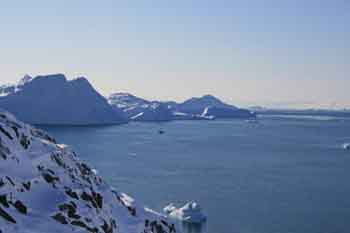 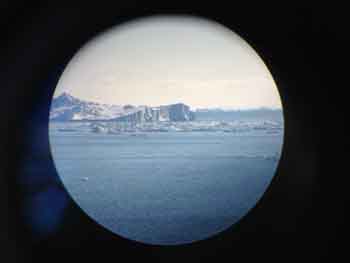 I discovered that I could take a photo with my iPhone through my small spotting scope. 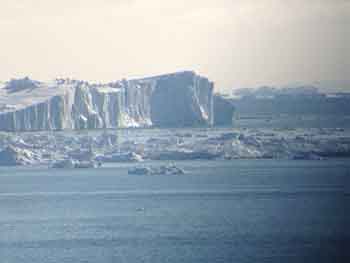 In the panorama above this berg is just to right of center, so the phone/scope trick works pretty well.  I looked at this one a lot.  To me this is sort of the quintessential ice berg. 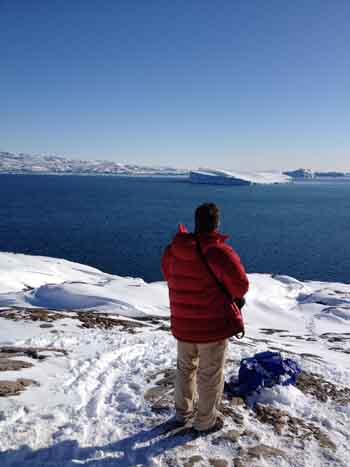 Matt and I could have stayed all day to look at the ice bergs but we had to meet up with everyone else for dinner.  On the way back to town we passed by the large area where most of the town’s dogs are kept.  These dogs are all for running sleds. In the foreground of the photo below are all the dog “sheds.”  The dogs are all tied up outside in pairs.  They spend the night out curled up in a ball.  They all appeared quite happy in the cold, lounging on the snow. 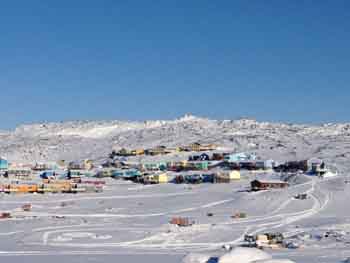 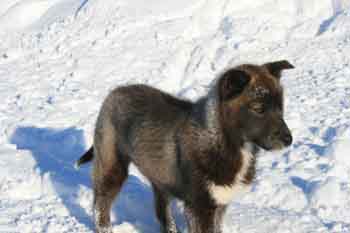 Its not quite @dogsinblankets but this guy was really cute.  He seemed to be a stray pup and he looked like he was looking for handouts but was too skittish to come close.  I wanted to take him home and name him Disko! 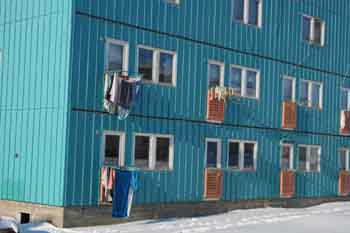 On the way through town I spotted this: laundry on the racks and fish (middle) on the racks.

After our hike, Matt and I met up with the rest of the gang at the Hotel Ice Fjord for an Easter dinner of local salmon and caribou (reindeer).  When we asked the waiter what the “game of the day” was, he said in broken English-“you know the animal on the front of the Santa Claus sled?”  (Caribou and Reindeer are the same animal but called by different names-Caribou in N. America and Reindeer in Eurasia.)

When dinner was over we made our way down through town to the kayak club of Ilulissat by the water.

Sarah said that in summer they sometimes have kayaking competitions here.  There is style of kayaking called Greenland style that derives from the techniques developed by the Greenlandic people, who for have historically used kayaks to hunt seals and whales and to travel from place to place. 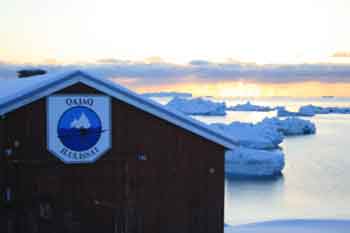 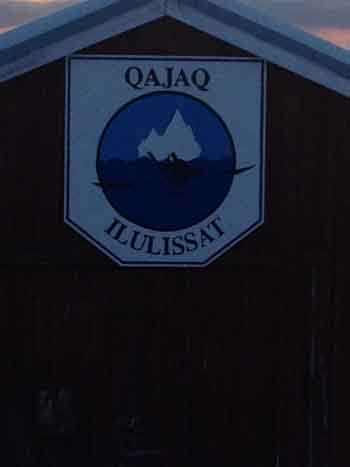 Carl and Sam and all my peeps at Osprey Sea Kayak Adventures, these are for you!

Because we are so far north, the sun sets late and these last photos were at about 9:30.  After that it was back to the hotel to pack for our day out on Disko (see earlier posts). 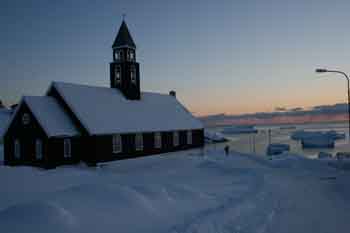 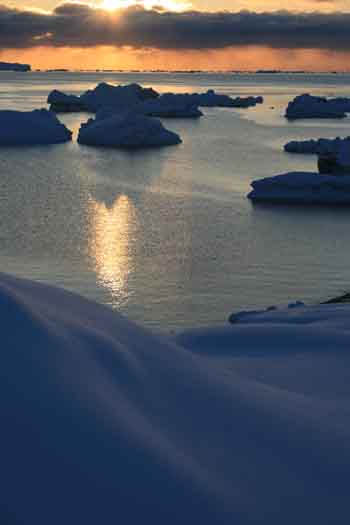 Tomorrow we should be able to head up to our first Nussuaq site.  As I finish writing the sun is shining in the window of the hotel (at 9:10!) so we are hopeful that the weather has broken enough to fly tomorrow.  We are hoping to hit two sites on Nussuaq in the next two days, but Ashley and I have to fly back to Ilulissat with Peter and the A-Star tomorrow.  A new pilot comes in on Friday and will return to Qaarsut to fly Matt, Sarah, Laura, and Ben up for the last day of field work.  In our original logistics plan Ashley and I were going to fly back to Ilulissat on an Air Greenland flight because the A-Star can only take 4 passengers.  We still have to do a version of that but we are going back with Peter and the other 4 are staying because we lost a couple days to weather.  We will all hopefully get back to Kanger by Friday or Saturday to fly home on Monday.